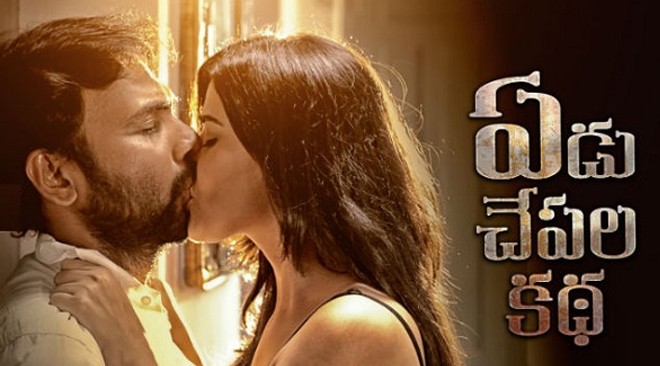 Star Cast: Bhanu Sri , Abhishek, Nagaram Suneel, Aisha Singh, Keerthi Moulkar, Avanthika, Meghana Chowdary, Akshara, Minnath Fathima.
Crew:
Edited by Manan Ashwin Mehta
Cinematography by Arli
Music Composed by Kavi Shankar
Directed by Sam J Chaitanya
CBFC – “A”
The greatest escape for an audience member is to see his fantasies play on screen. It could be thrashing goons or saving a woman from being “manipulated” or getting to live a life that he can never imagine in reality. When you narrate the entire story with emotions that bring dreams to reality people connect with the hero and they become stars or face that an audience member relate to. With “Tempt” Ravi attempting live a life of fantasies on screen, Yedu Chepala Kadha released on 7th November in Telugu states. Let’s see if this Ravi aka Abhishek will be really, “Tempting Star”…
First of all, Abhishek has ease in his body language and his dialogue delivery is better than many comedians and actors, we have today. Using him as Tempting Star is a better idea than making Sampoornesh Babu – Burning Star. Because, Abhishek scores much better in acting department than Narasimha Chari aka Sampoo, not taking away anything or disrespecting his talent, Sampoo does have glaring limits. In a satirical way, both films – Hrudaya Kaleyam and Yedu Chapala Kadha, give their heroes a “Star Tag”, hence the comparison.
Others like Aisha Singh, Nagaram Sunil, Bhanu Sri get few good scenes or moments but they don’t live up to them while rest of the scenes doesn’t ask for any effort. This film is more about Director Sam J Chaitanya showing his frustration to world and trying hard to make a successful film than narrate a coherent story. He left many things to thin air and censor scissors while he could have taken a leaf out of Senior Vamsy’s book.
If you remember, Vamsy after making Manchu Pallaki, Sitaara and Preminchu Pelladu, did not get frustrated that his films are not being “massive hits” but went for a pure adult comedy, Ladies Tailor without going vulgar route or narrating it in an absurd screenplay. He even made Anveshana to show off his skills in handeling comedies & thrillers. Here, the director found producers who can trust him but lost his eye on narrating a story even if it is in Adult space with censorship rules in mind. There is no use of “losing scenes” to censor scissors when you’re on a tight budget. Arudhathi film still had a coherent story while narrative was riddled with  inconsistentcy.
According to the plot, Tempt Ravi (Abhishek) has a rare disease termed Thalassemia and he has to find Blood donors every month for new blood transfusion, otherwise he may die. One day, when he finds no donor, he looses consciousness and Bhavana (Aisha Singh) helps him out. He falls in love with her but she doesn’t accept it. Suddenly, one night she spends “romantically” with him. After she slaps and ask him to leave her alone, he decides to not disturb her.
He is an orphan and lives with Radha (Bhanu Sri), who is also a Thalassemia patient along with two other boys. Radha and gang steal phones for livelihood while Ravi tries to earn a honest living through simple jobs. On the other hand, Sundar (Nagaram Sunil) learns the art of talking to ghosts and he forces them to “satisfy” him. Bhavana learns she is pregnant and Sundar saves her from committing suicide. How story moves forward from here? Watch the movie on screen.
Sam J. Chaitanya was highly vexed up with rejections and structure that slams his dreams to pieces. Looking at the film, one feels so. Vamsy style of narration in April Okati Vidudala or Chettu Kinda Pleader or Joker could have helped this film to see a coherence and not be abstract which doesn’t help its cause at all. The team driven by making a film somehow lost hope and made a movie that is “Easy to earn a quick buck”!  Still, even one rupee spent on a film is budget and when there is budget, there should be passion to engage audiences than make something to take ‘revenge’. This Tempt Ravi is not tempting enough, take good precaution before entering the screening.
Rating: 2/5