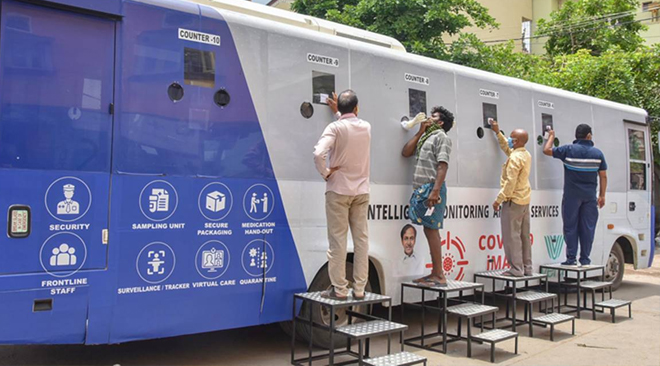 Telangana continues to report over 2,000 coronavirus cases on a daily basis. On Thursday, the state reported 2,092 cases in comparison to the 2,012 cases reported on Wednesday. State health officials said that with the latest updates, the overall tally has jumped to 73,050 while the death toll climbed to 589 with 13 deaths reported in the 24 hours ending 8 p.m., on Wednesday.

As per the health department’s media bulletin, results of 1,550 samples are awaited.

The case fatality rate in the state stayed at 0.80 per cent, well below the national average of 2.09 per cent. While 46.13 per cent of deaths were attributed to Covid-19, of 589 fatalities so far, 53.87 per cent suffered comorbidities.

Officials said the number of active cases now stands at 20,358 including 13,793 persons in home/institutional isolation. More than 84 per cent of those under home isolation were reported to be asymptomatic.

However, the numbers continue to rise in the districts. Warangal Urban saw 128 new infections, Karimnagar 123, Nizamabad 91 and Rajanna Siricilla 83 cases.

Out of 33 districts, only one districts reported no new infections while in two districts the new positive cases were in single digit.