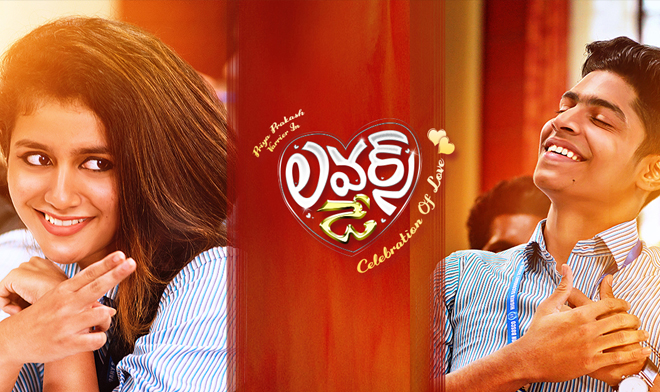 Wink Girl Priya Prakash Varrier became popular with one song and two promos from the movie, Oru Adaar Love, which released as Lovers Day, in Telugu on 14th February. Let’s see how the movie is …
Story::
Roshan (Roshan) falls for Priya Varrier (Priya Prakash Varrier) and their friend Gadha (Nooreen Sheriff) plays cupid in their love story. She likes to be free-spirited and Roshan likes that about her. Priya keeps playing yes-no game with Roshan and one day that leads to Roshan leaving Priya. What happens next is anybody’s guess…
Performances::
Roshan, Priya Prakash Varrier, Nooreen Sheriff have charismatic faces and some ease in body language. But that is not enough to sell a Kuch Kuch Hota Hein kinda love story with Sairat twist!
Technicalities::
Shaan Rehman did give few good songs but in BGM department gave a loud score and decided to fill all the gaps in the storytelling with loud music.
Seenu Siddharth’s visuals are highly saturated and they seem like glorifying the stupidity that surrounds the young-adult age. There is no celebration in this vibrance.
Acchu Vijayan as editor couldn’t make any sense of the scenes written by the writers and the way they have been shot. He just tried to give the movie a rhythm but that didn’t work.
Lijo Panoda, Sarang Jayaprakash as screenplay writers failed in arresting people with dialogue and characters. They just couldn’t bring in originality to the table in any sense.
Omar Lulu as a director seems to not know the basics of making a scene enjoyable. He tries to fill it up with vibrant colors and bring unnecessary overaction to the table with irritating scenes. A film needs to have good flow but he seems to lack in designing strong characters and developing good scenes. He needs to learn a lot more, before making another film.
Positives::
Cast has couple of charming faces.
Negatives::
Performances of the cast
Underdeveloped story
Lack of originality
Over-action in the name of energy
No clear cut aim in screenplay.
Bad Direction
Analysis::
An young-adult romance need not always be a Sairat. It can be anything other than that too. But Omar Lulu, the director seems to have taken inspiration from that movie and added his own Kuch Kuch Hota Hein type love triangle to the mix. He lacked any maturity in handling the love story and if Priya Prakash Varrier wouldn’t have gone viral with a wink, this movie wouldn’t have even got to theaters on its own. Stay away from the senseless torture.
Rating: 0.5/5