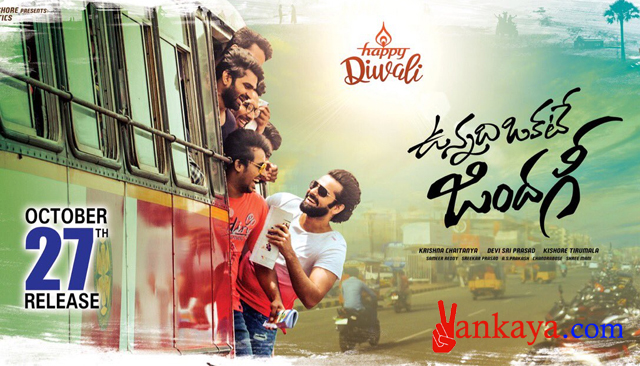 The major issue any adult would be facing in their lives after a point, Should I be the same with my friends? Or should I give importance to the new woman who enters into the life eventually after a point? Few balance nicely but many face problems like disconnecting with a liveky friend or facing turbulence in family life! This point of who is more important in life has been a subject of discussion in films right from 1950’s. But the melodrama and the delivery of expression changed with each decade and film. Let’s see how Ram Pothineni, Anupama Parameshwaran and Lavanya Tripathi with Sri Vishnu film Vunnadi Okate Zindagi is different and enjoyable to them…

When Abhiram (Ram) is in an emotional vulnerable place a young hand consoles him and that is Vasu (Sri Vishnu). Both the youngsters connect instantly and develope a great bond as Childhood friends. But the entry of Maha (Anupama Parameshwaran) changes this equation.

Both fall for her and differences creep in between them as one gives more importance to love than friendship. Abhi and Vasu separate from each other and how they meet again forms the rest of the story. What Meghana (Lavanya Tripathi) does in this story and how the entire equation gets balanced, you have to watch the film to know more … (Story might seem highly cryptic, it is injustice to tell the entire story of such nostalgic based film, please understand)

Ram Pothineni as Abhiram is his natural self on screen. He doesn’t try too much to fit into the character and it seems like a natural flow to him. In a way, even though his look is new, his dialogue delivery or mannerisms doesn’t change much. May be next time, he tries to improve on that aspect to. There should some difference for Ram and Abhiram.

Sri Vishnu seems too wooden for this highly emotional tale. He needed to express his feelings as it is hard to read a blank face. It would be better if he tries to understand how restraint underplay is different from simple blank straight face.

Anupama Parameshwaran and Lavanya Tripathi characters do have some meat but they are too routine for the actresses to talk about. Both suffered from over Make-up syndrome and we have to say, the director should have concentrated on giving them more presentable make-up than over doing it. Anyways, in the limited scope they had, they justified their presence.

Priyadarshi got some huge laughs and others are just too routine.

No stream-line focus on main subject

Characterisations and screenplay too routine

Been there seen that feeling that lasts through out the movie.

Cinematographer Sameer Reddy, tried to enhance every location by using extra lighting without caring for the necessity. In a film, that talks about nostalgia, keeping it real is more important than making it look surreal. He tries to use many elements that at times disconnect you with the realistic setting off the scene. He should have taken care of that aspect.

Editor A. Sreekar Prasad should have concentrated more on keeping the movie concise and precise to the point. His work in major emotional  sequences is good but film could have been wrapped in lesser run-time as the point is not new.

Music by Devi Sri Prasad is good enough for the story in the theatres but it doesn’t have a lasting feel like Nenu Shailaja or Arya, that could have helped the movie better. Still, two songs are hummable and it depends on movie’s popularity for the audio to click further. His BG Score is too routine for this subject.

Director, Tirumala Kishore tries to drive home a point, having human connection as a friend or love is more important,  with a debate on friendship and love.

It is human connection that makes Abhiram and Vasu, closer than friends and that is the only novel point in this overlong narration. The scenes seem too routine and he even uses few, directly from popular Hindi and Telugu films. These kind of films should be as Novel and as new as they can be. But the writing highly disappoints with been there see that characters. The fun in Nenu Shailaja is missing and some forced emotions take over the simple and sleek narration that Tirumala Kishore seemed to have attempted over 2 hrs 39 minutes runtime.

The point here is not new but there are few sequences that drag on and on. We hope for a trimmed up version of the same scene as it doesn’t really end after a point of time. The writing needed to be fresh and even though that is lacking, Kishore manages to make a fun weekend film that neither hurts nor really works big time. If you have enough time and money you may consider this movie as a fun one-time watch.