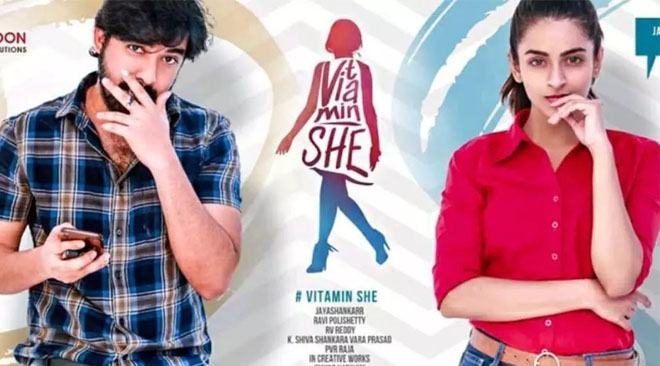 Technology has taken over our lives in the current times, in different ways. We are using technology for different things. A lot of people are getting addicted to technology in such a way that they don’t treat other humans properly. The human relationships are getting tampered because of this technology. Amidst all this, the director Jayashankarr has come up with the latest Telugu movie Vitamin SHE which is currently streaming on MX Player and Amazon Prime Video. The film released yesterday and check out the film’s review here.

Leo is addicte to his cell phone. He falls for his colleague Vaidehi. Vaidehi hates Leo. Leo buys a new phone with an inbuilt voice assistant Laila. Laila guides Leo with regards to everything. With the suggestions that Laila gives, Leo becomes close to Vaidehi. In no time, Laila falls in love with Leo and what happens after that forms the story of the movie.

There are limited characters in the movie. The maximum runtime is occupied by the lead characters. The male lead appears as the guy next door. The female lead is also good. Both are fit in the roles they were given. They played their parts as per the limitations and did their best in coming up with good performances.

Vitamin SHE is shot amidst the lockdown with limited resources and limited number of people. With a new cast and crew, the director attempted a big challenge in coming up with the film. The team must be appreciated for the effort that they put in. Choosing a simple concept and penning an engaging screenplay for the same is impressive. With limited characters and limited locations, the makers brought a good output. The runtime is very less and it is a huge plus point for the movie. There are no silly and unnecessary tracks in the film. The technical aspects of the movie are too good. The camera work is excellent. The background score is alright. The editing is fine.

The relationship between a human and a voice assistant is very new to the audiences. Just like how Siri, Alexa and Google are there, the director created a voice assistant character Laila. Just like the film Robo, the core concept of Vitamin SHE explores the love relationship between a human and a man made thing. The film offers decent entertainment. The conversations of the movie are engaging. There are multiple elements in the film that created a special interest in the audiences. The director tried his best to explore multiple layers involved in the concept. Technology angle has ben dealt well and it opens eyes of many at how people are forgetting human bindings and getting addicted to smartphones. The director did not bring in unnecessary scenes and maintained a good flow of screenplay.