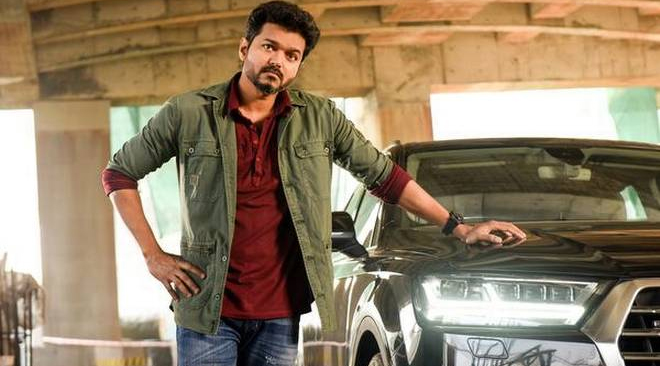 Thalapathy Vijay from Tamil Cinema grew from his Telugu dub movie being a release for a silent week to gathering a huge frenzy opening in Telugu states on opening day. As he joined hands with AR Murugadoss who made his biggest blockbusters Thuppakki and Kaththi, for Sarkar, the movie got even wider release for Diwali. Let’s discuss how the movie is …

Sundar Ramaswamy (Vijay) is a ruthless Corporate person who works as CEO of GL company for Rs. 1800 crores salary per month. He decides to come to India to cast his vote. By the time, he enters the polling station, he gets to know that his vote has been cast by someone else. Frustrated by this development he decides to cast his vote and then only leave.

As the polling day is over, Election Commission asks him to co-operate with them and not make it a big issue. But he moves to court and brings to light 49P section in Election Law. What is it? Will the politicians be happy with him exposing the fraud?

Vijay as an actor has never been known for trying out high intensity roles like Suriya or Vikram. He is more of a mainstream hero that commercial films need. He comes up with such histrionics in every movie that arrest his fans and common audience. In this film too, on his part he did the best he could but even his over stylishness has harmed few scenes here and there.

Keerthy Suresh is wasted in the movie. Varalakshmi Sarathkumar came up with a very subtle performance and she could scare the weak-hearted with her coldness. Radha Ravi, Tulasi, Yogi Babu did their best in lackluster characters.

Girish Gangadharan gave good visuals to showcase the grandeur in the story. But he did not try much of any lighting techniques to match the story and emotions in the scene.

Sreekar Prasad seems to have edited the first hour better and couldn’t understand the second hour well enough. He did try to keep things crisp but as the film progresses he too lost the grip.

AR Rahman songs try to suit the story. As the story doesn’t have any sense, even his songs don’t impress. BGM is the biggest plus for this movie.

AR Murugadoss as a writer seems to have lost the basic sense of story telling. In his world, a multi-billionaire CEO who can change economical landscape of a country doesn’t receive a welcome from Central and State Government. The Corporate group watches TV rather than lobbying at International level.

A politician’s daughter who knows very well about him doesn’t give an heads up to his father about the person coming. Even when he announces that his intention is to vote, even the local MLA team or strong political party group doesn’t try to influence him by pampering him. Like this there are many loopholes that younger Murugadoss would have thought about. Now, a more successful Murugadoss seems to believe his idea is all that is enough rather than a convincing film.

Trying to commercialise every moment in the film

Political situations and scenarios don’t really change from film to film. How many ever films have been made from 1960s to till date, all of them talk about a change in established order and system. Just the real situations around us change giving ample scope to directors to deliver a good satire on them. Right from Muhammad Bin Tuglaq to till date, the political dramas have been establishing one point clearly that is, power corrupts. The solution to the issues change but if a political issue is raised out of a common man problem, then what?

AR Murugadoss thought about this and took example of Mudhalvan/Oke Okkadu and tried to bring a real igonred issue to light. But the problem is that he wanted his hero to be a CEO and Corporate Criminal while even a regular School Teacher or a Lawyer can achieve what he showed. In a day and age when postal ballots are available and e-voting is also being discussed a very happy and criminal minded CEO would really come to a county, just to vote? Well, right from the idea, the movie is Outlandish and Amateurish. If you’re a fan of Vijay, give it a try.