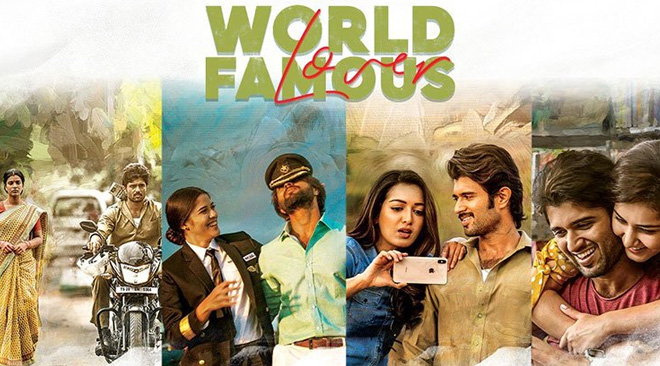 Star Cast: Vijay Devarakonda, Raashi Khanna, Aishwarya Rajesh, CCatherine Tresa, Izabelle Leite.
Crew:
Music by Gopi Sundar
Screenplay by Kranthi Madhav
Cinematography by Jaya Krishna Gummadi
Edited by Kotagiri Venkateswara Rao
Directed by Kranthi Madhav
Producer by K Vallabha
CBFC: U/A
Runtime: 155.41 minutes
World Famous Lover is the new movie from hot and happening star of Telugu Cinema, Vijay Devarakonda. He said that this is his last Love Story film and filled this movie with the maximum amount of love, in all possible forms. Raashi Khanna, Aishwarya Rajesh, Isabelle Leite, and Catherine Teresa also joined Vijay in crafting a love story for ages. Let’s discuss what Kranthi Madhav made going back to the romance genre with WFL after Malli Malli Idhi Rani Roju…
According to the story, an MBA graduate and successful manager turned writer, Gautham (Vijay Devarakonda) is hit by a cyclone when the love of his life, Yamini (Raashi Khanna), who is in a live-in relationship with him, announces break up. She feels that Gautham has turned into a useless hag who is not caring for his life or her. For a year, Gautham fails to come up with a good story that he can tell to the world that he wrote it. Yamini fails to understand this and Gautham states conveying it in fictional stories with a novel named, “World Famous Lover”. How he translates his pain into writing? What are those stories and will Yamini & Gautham meet again? Watch the movie to know answers…
Vijay Devarakonda came up with a good performance in all the shades of his character. But he did not convince us as much as he could in films like Geetha Govindam or Arjun Reddy, as a character with his varied performance. He has great ease in doing anything but he needs better writing for it to reflect on the screen. Raashi Khanna has become a good performer and she needs to get more opportunities to explore her acting skills as well. Isabelle Leite, Aishwarya Rajesh are good in their roles. Catherine Teresa was just there. No other actors leave any impact.
Music by Gopi Sundar is very basic and he can give much better tunes than this. In fact, he did that in the past for many films. Maybe he too did not find any inspiring story to give his best. He tried his best to cover all of it in the background score but it wasn’t enough. Cinematography by Jaya Krishna did not give the film any kind of necessary structure for us to fully involve in it. Editing by Kotagiri Venkateswara Rao is not as good as we expect from him.
Any love story depends on  basic information – “who” are in love?; “why” there are in love?; and “what” drives them together? In this film, that who, why and what seem like unimportant questions while they are the basic. The strength in defining those “3W”s make or break your film. Kranthi Madhav in all his stories doesn’t give those W’s necessary amount of respect and we have a film that could have been a definitive answer to new-age love that genX is looking for. Yes, this point had that potential but the director and writer, themselves failed to recognize it.
This film lacks in basics and also doesn’t give a soul to the proceedings. There is painstaking detailing in showing the life of a Singareni Coal Miner but the writing feels like an extension of 80’s Dasari movie. There is a good love story waiting to be explored in “Paris” portion but it again feels like a Tamil movie that is made by a director who wanted to make a Bharatiraja meets Bhagyaraja story with a Balachander finesse but failed to get the mix right. On the whole, the entire movie feels like a short film stretched with two more stories added to it, just for the sake of it. You may find better ways to spend your Valentine’s weekend.
Rating: 2/5