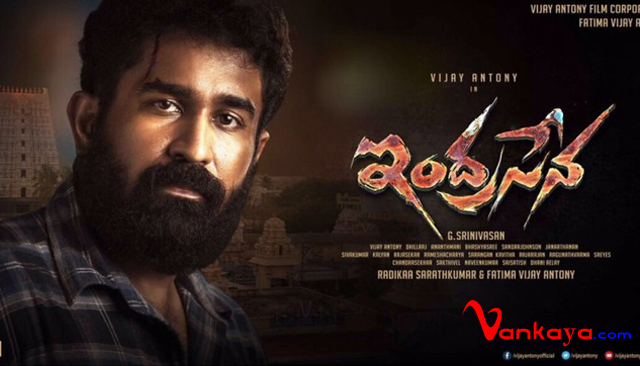 What is the definition of a good guy? In terms of Relangi mavayya from Seethamma Vakitlo Srimalle Chettu, “Every Human is inherently a good guy!” But can that good guy come out to do anything, literally anything to save his family? We can’t really be sure until we find such a person in real life. In reel life though, we can find such people and latest addition to the list is Indrasena. How?? Read on..

Indrasena (Vijay Anthony) saves an young girl from being raped and she starts treating him as her God. Indrasena doesn’t accept her love as he is an alcoholic. He mourns the death of his true love, Elizabeth, who died in front of his eyes. He is a good guy and has a tendency to go out his way to help someone close to him. Due to his nature, he puts himself and his family future in trouble.

On the other hand, Rudrasena (Vijay Anthony), brother of Indrasena, works as a PT Teacher in a local school. He loves Revathi, who loves him without many conditions. They both decide to get married and their parents agree happily for their union. In a complete drunk state, Indrasena commits a crime and that ends disrupting the lives of Rudrasena and entire family too. Indrasena goes jail and as he comes back he finds his own brother as a goon. What happened when he is in jail? What crime did Indrasena commit? How will he resolve everything? Watch the movie on screen to know the answers.

Vijay Anthony just ends up being a stone face once again. He tries few differences here and there in body language but expression wise, he still needs to try hard so that the characters and story he chose won’t go in vain.

Nalini Kanth, Kaali Venkat are good in their roles. Rest of the cast are literally unknown faces for Telugu people. Hence the is a disconnectivity. Still, the performances from them are good enough to ignore it.

Dillraj, the cinematographer of the film tried hard to give it a rustic and realistic look. He succeeds for most part but he still doesn’t completely let the character of the village this story is happening to come out. Such work would have helped the movie much better.

Vijay Anthony, as a music composer is a seasoned campaigner. He did his best in finding the right notes to elevate different scenes. For his shortcomings on the screen he tried his best to cover them up behind the screen. Still, the back ground score doesn’t entirely add up to the film flow.

Vijay Anthony, as an editor knows what kind of a cut really suits the film. He never tries overlap on the main elements of the story. He maintains a decent pace to keep the proceedings interesting. But the script is too old and diluted to have any impact.

Writer and director, G. Srinivasan seems to be a great fan of late 80’s and early 90’s. He takes a theme that is so much relevant to those times and tries to weave a family drama around it. We see a person unable to move ahead after love failure, a family completely being dragged to roads just because someone in their family went to jail and a loyal lover who still thinks about her lover after failed attempts at marriage.

All these elements do not really add up in today’s society where things are more likely to happen in a lighter vein and more logical way. One may, it is set a village and villagers could be going through such melodramatic things in life but no one will be so backward in this day and age that they still think signing on a stamp paper without anything written is ok. Director needed to come up with more life in his characters and better situations that convince the dumb decisions  characters even protagonist takes to highlight the protagonist as the ultimate good guy, in the climax.

Not upto the mark performances.

The movie is really a tribute to 80’s movies. Also, the Television serials have been exploring similar themes in a similar way. It needed much more imagination and skill to let today’s invest more in a story that is too old and highly melodramatic. At times, it goes from being silly and dumb to utter unrealistic narration. On the whole, it highly disappoints due to unimaginative narration.