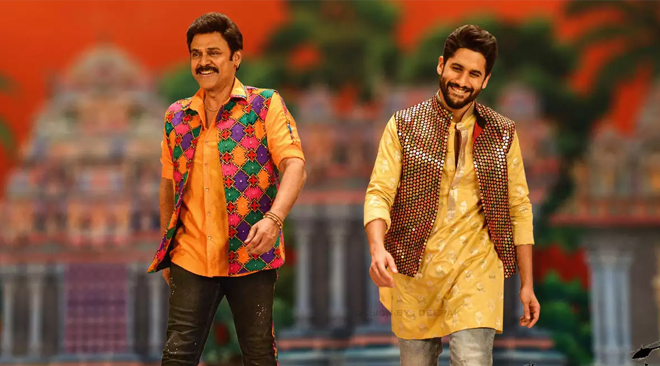 Cast: Venkatesh, Naga Chaitanya, Raashi Khanna, Payal Rajput, Naseer, Rao Ramesh
Crew:
Cinematography by Prasad Murella
Editing by Prawin Pudi
Written by Janardhan Maharshi, Kona Venkat, K.S. Ravindra
Music by SS Thaman
Directed by K.S. Ravindra
Produced by Suresh Babu, T.G. Vishwa Prasad, Vivek Kuchibotla
CBFC: U/A
Runtime: 149 minutes
Venkatesh and Naga Chaitanya are in discussions about their multi-starrer from 3 years. Legendary producer, D. Ramanaidu wished to bring this combination to life but he couldn’t. To complete his wish, Suresh Babu, his producer son started searching for scripts and finally, brought Venky Mama to life. Director K.S. Ravindra wrote the script and directed the movie after going through lot of screening process by Suresh Babu, Venkatesh. Movie released on Friday, the 13th December. Let’s see how it shaped out on screen…
The story starts with Venkatratnam (Venkatesh) who always wished to become a Military officer so much so that, he got a title as Military Naidu in his village Draksharamam, caught by Military for breaching the security code. He explains to the officers that he came to meet his nephew, Karthik (Naga Chaitanya) whom he last saw, three years ago. What happened between them? Why did Karthik leave his village to join Military? Who are their love interests? Watch the movie to know more.
Main problem with this film is that the writing is too lethargic and flawed beyond any repair. Venkatesh’s character which has to be the cog of the story, feels flat and underdeveloped. Naga Chaitanya’s character too doesn’t appear to have been well-thought out. Trying to give equal importance and screen-time to both the actors, writers did not weigh-in on the overall character arcs of their characters. Both look too silly and bland for even a regular viewer’s liking. The screenplay seems like to be written by a writer who is still in 70’s style of filmmaking.
None of the scenes seem original. None of the jokes seem organic. Everything looks like to have an old scene or old film for inspiration. The love tracks and the character moments appear even lethargically written so much so that, one wants to ask the writers to stop, think and write again, even while watching the film. It is a wonder, how come a producer like Suresh Babu accepted this over-the-top silly script for such a prestigious film.
Performances wise none of the actors are given scope to show their talents. Venkatesh suffers the most due to this bad writing. He is an actor who can elevate a simple scene to next level, but he is not given any good material due to the unimaginative structure and writing. Naga Chaitanya mostly sleepwalked through his role and other actors appear even more silly as their talents are wasted. Raashi Khanna and Payal Rajput are used as glamour dolls but even they couldn’t save bland scenes with their oomph.
Music by SS Thaman lends to the feeling of us being in 80’s film theater watching a 70’s film re-run. His Background score can be treated as one of his careers worsts. Cinematography by Prasad Murella and Editing by Prawin Pudi are in sync with the writing. VFX is rushed and direction by K.S. Ravindra will be rated as one of his weakest works. He seems to have fixed himself to a template and is unable to think beyond that.
On the whole, we can say that the movie seems to have been doomed from the word go and the producers finished it in a hurry to release it before it becomes too expensive mistake on their balance sheets. Wait for home video release as it doesn’t deserve your hard-earned perks.
Rating: 2/5