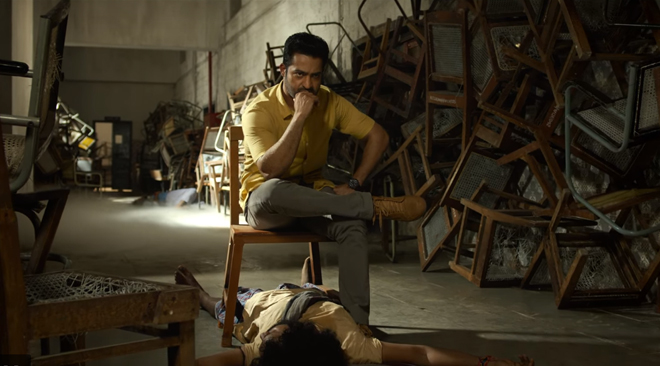 Trivikram Srinivas is one director who is known for his sleek production values and the grandeur of the visuals. Except for the debut directorial ‘Nuvve Nuvve,’  he has never compromised on the budget. Be it home production or outside production, there are no compromises with the budget.

Despite the massive failure of Agnyathavaasi, he is said to be following the same dictum of high spending for his latest film with NTR – Aravinda Sametha Veera Raghava. For this film, he needs a tree with leaves that have ripened and are yellowish. He tried many trees but wasn’t satisfied in the least. So, he now got plastic leaves from Chennai and wanted the art director to design a tree with these leaves.

During the shoot, the leaves fell off because of the wind. The whole unit had to work hard to stick the leaves to the tree.  We don’t know why these yellowish leaves are needed. But, we do know that Trivikram is past-master in the art of producing sleep visual treats with razor sharp wit and wonderful dialogues.

The film is set for October 11 release. As of now, the promotional are yet to begin. Only teaser got release. The film’s shoot was affected due to the untimely death of Nandamuri Harikrishna. To compensate for the loss, NTR is shooting both day and night.

By the way, know how much he spent on the leaves? A staggering Rs 25 lakh. If the film goes on to become a hit, this expenditure would be praised. God forbid the film flops, it would be called profligacy and waste of money!!