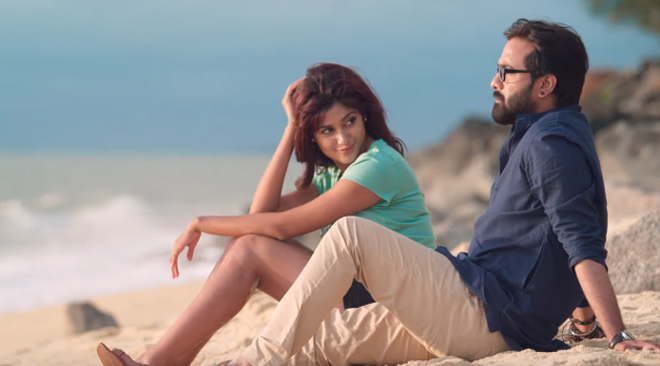 Tharun started his career as a child actor and won hearts of many families. He then started concentrating on studies but all of a sudden he turned into a lead actor with Nuvve Kavali. The movie made him ultra famous and he chose to do more and more love stories. He became a heartthrob of young girls in early 2000’s. But he couldn’t continue with love stories all the time and his other films did not work.

So, he came back with the movie, Idi Naa Love Story, after a gap of 3 years. Let’s see how this movie worked out for him…

An ad filmmaker, Abhiram (Tharun) decides to meet a neurosurgeon, Sruthi (Oviya Helen) after his sister sets up a date. They both end up connecting with each other over the day, by telling about their love stories and past experiences.

Slowly, Abhiram falls for Sruthi but he finds out that real Sruthi is someone else and he is taking to her patient, Abhinaya (Oviya). Still, they fall in love and as the night progresses they come close too. Next morning, Abhinaya gives a police compliant that Abhiram sexually harassed her. Why did she forget everything? What is her problem? Is it curable, if not, what will Abhiram do to make her believe that they are in love? Watch the movie for answers..

Tharun coming back after a gap, did looked aged rather than fresh. He tried his best to look the part and give an honest performance but his old traits did not let him be the completely new version of himself on screen. It just looked like we are watching an old film of Tharun in theatres rather than appear as a new one. Still, he proved that he has the spark to carry a film.

Oviya Helen, the actress got majorly popular due to her looks and Bigg Boss Tamil controversy. She had a good character to show off her acting skills but as she lacks in them, she just roamed around in soms tight clothes and shots. In a day, the costume changes that she gets in the film, are really crazy.

All other actors are not known and they don’t have good characters to talk about as well. Manchu Manoj did a cameo in the film.

Cinematographer, Christopher Joseph tried to shoot some good locations but couldn’t bring the quality output that a personal love story like this needs. The changes in the color tones or schemes or timelines is highly missing. We just feel like we are watching a telefilm on screen at many places.

Music by Srinadh Vijay, even though sounds like we heard it somewhere, is good in parts. The rich instrumentation helps us sit through them. But the lyrics kill the impact and even the choreography is pale. There is nothing to talk about back ground score except to say that it is highly copied from AR Rahman tunes.

Editing by Shankar is not upto the mark. He needed to judge the scene lengths perfectly and trim it down but he couldn’t. He just assembled a film out of the footage but there are many scenes that he could have cut out of the film.

Writer and director, Ramesh Gopi, failed to transfer a new-age love story like Simple Agi Ondhu Love Story, on screen. Kannada viewers, accept decent love stories that end up in tragedy and even Telugu people can watch them but the conviction is highly needed. The original film is heavily inspired from Hollywood Film, Fifty First Dates and re-imagined the film like strangers falling in love by sharing their love stories.

Ramesh couldn’t convince us with his writing as his dialogues were to amateurish and his scenes are not captive enough. We just miss the logic behind these two falling in love or don’t connect with their old love stories. While, Tharun did try to lift the scene with his performance, the director killed it with his hyper rhyming dialogues and senseless punches.

The most important thing that an actor or a director, needs to remember is that time changes. With time, story presentation needs to change as well. You can write lengthy monologues to pass them off as in-depth soul-stirring moments in a love story. The structure needs to have character foundations. And on top-of-it, an actor needs to re-invent himself all the time.

Even Chiranjeevi needed to re-establish his image as Annayya and Man of Masses, when he faced low times. You need your passion to show on screen. Unfortunately, neither Ramesh Gopi or Tharun had the right idea of how to present a story that otherwise could be laughable with astute seriousness.