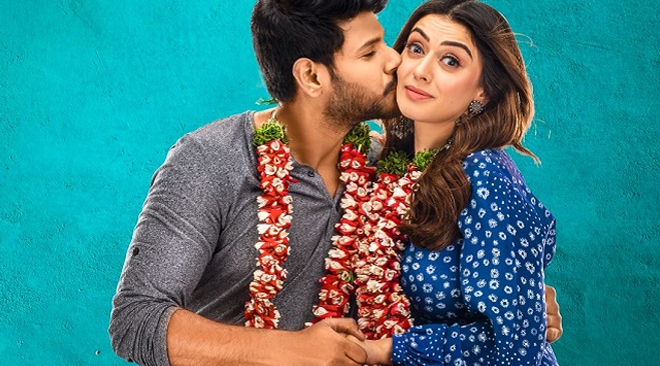 Cast: Sundeep Kishan, Hansika, Varalaxmi Sarath Kumar, Murali, Sharma, Vennela Kishore, Sapatagiri, Prabhas Seenu
Crew:
Story – Screenplay: Rajasimha
Music: Sai Karteek
Cinematography: Sai Sreeram
Editing: Chota K Prasad
Producers: P Naga Bhushan Reddy, K Sanjeeva Reddy, Roopa Jagadeesh, Srinivas Indumuri
Writer and Director: G Nageshwara Reddy
CBFC: U/A
Runtime: 128:40 minutes
Sandeep Kishan has been trying hard to find box office success ever since he got a hit with Venkatadri Express. After 9 to 10 flops, he has come up with yet another film, this time a comedy in the direction of a seasoned director like G. Nageswara Reddy. Hansika Motwani also joined the team for this Tenali Ramakrishna BA BL. Let’s discuss about the film and its merits.
Tenali Ramakrishna (Sandeep Kishan) wants to become a rich lawyer than famous and good one. Hence, he provides various schemes to the customers and try to attract as many as he can. But his father, Durga Rao (Raghu Babu) turns out to be his enemy, as he sends away any potential cases that go to Ramakrishna. He urges his son to become famous by earning image than money.
Ramakrishna falls in love with Rukhmini (Hansika) and her father, Chakravarthy (Murli Sharma), a famous criminal lawyer hates Ramakrishna and he slaps Durga Rao & prunes him showing his job, social status as a broker who brings cases to lawyers. Ramakrishna promises to win against Chakravarthy in a case that he schemes to lose against Varalaxmi (Varalaxmi), a local politician in association with her nemesis, a rowdy. Can Ramakrishna win in the challenge against Chakravarthy? What is the case that the rowdy planted against Varalaxmi? Is there a twist in the take? Watch the movie for answers…
Coming to performances, Sandeep Kishan again tried his best to deliver an enjoyable performance. He used all his energy and strengths, skills to prove that he can carry a movie on his shoulders. But again his script selection found to be his enemy. Movie could have been a good comic piece like Jolly LLB 2 but it loses any such setup with lazy writing. Hansika’s character and performance can be seen as the examples of laziness in execution and inert script. Varalaxmi and Murli Sharma try but even they were highly wasted in a screenplay that jumbles up and becomes messy with no proper goal.
Technically, movie is the weakest from Nageswara Reddy and this tops even Intlo Deyyam Nakem Bhayyam, Achari America Yatra films from him. The director seems to have lost his touch in handling simple comedy scenes and emotional scenes. Action was never been his strong suit and that becomes a glaring miss in this movie. Cinematography, Music, Editing and every aspect adds to the clumsy output indicating that the team was not in great confidence about the script.
With each scene starting somewhere and ending altogether at a different place, we feel the film is highly disjointed. Logical loopholes in a courtroom drama are must but rather than building on intelligence of the two leads, film divulges into song and dance routine like a 90’s flick. This style of lazy and lethargic making hampers the film so much that we cannot give even Sandeep Kishan who put-in his sincere efforts in the film some sort of consideration and watch it for him. 80’s courtroom dramas had better logics and interesting scenes but this one just seems like a simple skit dragged as 2 hour long script with Meme jokes. Avoid it.
Rating: 1.5/5