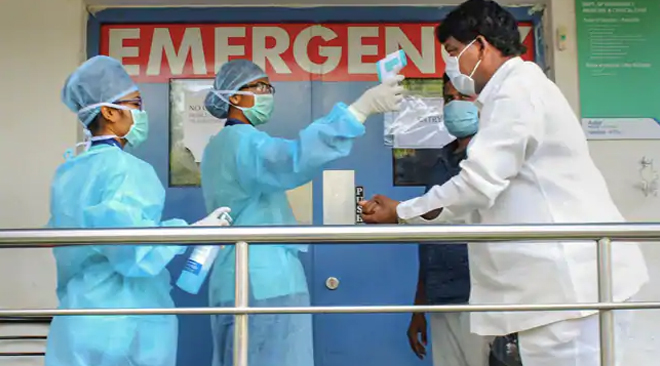 In the biggest ever single day spike in Covid-19 cases in Telangana, 169 people tested positive while four more died due to the dreaded virus on Friday.

Four fatalities took the death toll to 71. Those who died during the last 24 hours include a 59-year-old who was suffering from multiple myeloma. He was admitted and treated in hospital for the past three days.

The other three included a woman. The deceased were aged between 53 and 62 years.

The number of Covid cases continued to soar in the state with 169 new cases from Thursday 5 p.m. to Friday 5 p.m. The biggest single-day jump pushed the state”s tally to 2,425. Officials said the number of active cases stands at 973.

The new cases include 100 local cases, 82 of them reported in Greater Hyderabad.

As many as 64 deportees from Saudi Arabia and 5 migrants also tested positive during the last 24 hours.

This is the third consecutive day that deportees were tested positive. The number of deportees found infected rose to 207.

According to officials, the Central government had airlifted 458 deportees and they were quarantined in government-run centres in the state.

During the last three days, the state has reported 434 cases including 207 among deportees. The increasing number of cases in Greater Hyderabad Municipal Corporation (GHMC) limits continued to be a worry for the health authorities.

“In the past few days, there has been a surge of new cases in GHMC area. It is once again reiterated that all the non-pharmacological preventive measures have to be implemented strictly. Vigorous contact tracing, strict quarantine measures (home and government), risk assessment, judiciously assessing the area of containment, strict perimeter control have to be taken up. At this juncture, risk communication plays a major role in behavior change thereby mitigating further spread of infection,” the medical bulletin said.