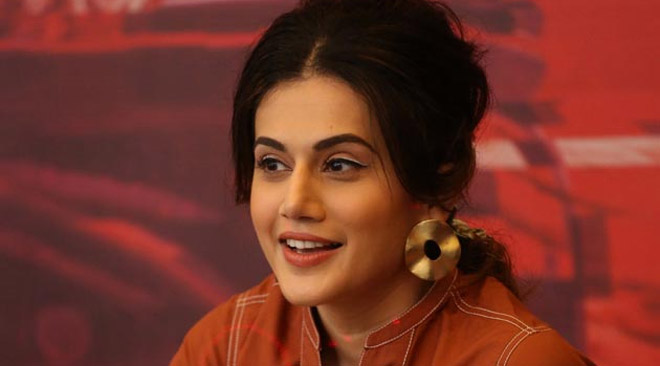 Powerhouse performer Taapsee Pannu will return to the South with the psychological thriller Game Over, which will release in Tamil, Telugu, and Hindi worldwide on June 14th.
Taapsee Pannu interacted with media in Hyderabad, prior to her movie release.   She opened up on her career in the film Industry.
Q: How did you zero in on Game Over Script?
A:  I heard the script one and a half years ago, Sashikanth, the producer called me and pitched to read the script.  I knew Ashwin’s work in Maya and later talked to him to discuss the script.  When I called him, he gave me the whole written script.  The script and story are never seen one in Indian cinema, to my knowledge.  Even in the  Hindi films I did, I did not find this script.  So, readily I agreed to do the film, be it any language.  Then we did the movie in a year or so simultaneously in Tamil and Telugu.  After the first copy came out, both Reliance Entertainment and Anurag Kashyap saw the copy and were so impressed.  Immediately Reliance group pitched to present the movie in Hindi too, as they thought the story was universal.  Anurag Kashyap came forward to present the movie in Hindi.  I always do one Telugu film per year, but you can say this is a straight Tamil film I am doing after Kanchana, the Raghava Lawrence movie.  The story of Game Over is a game-changing one for Indian cinema.

Q: Did this movie  take a toll on you physically, to do a physically challenged woman, in two languages
A: It was, yes.  I did not have even a hairline injury in my life, to date.  To act as a wheelchair-bound person for almost 60% of the movie was a challenge.  Added to that, mentally it was taking a toll on my mind too.  I play a traumatized girl in the movie.  You might have seen the trailer, with me hallucinating.  I have an accident in the movie and then slips to mental and physical trauma.

Q: How did you manage the prosthetic makeup?
A: I ended up doing my makeup, tying my legs, even in my lunch hour.  I shot the movie for 35 days.  The leg cast took me half an hour to put on.  I shot 12 to 15 hours every day.  37 days was the entire shooting time, with some patchwork.

A: No, No I will get married only when I feel like starting a family and raise kids. Not now. Thank you all!