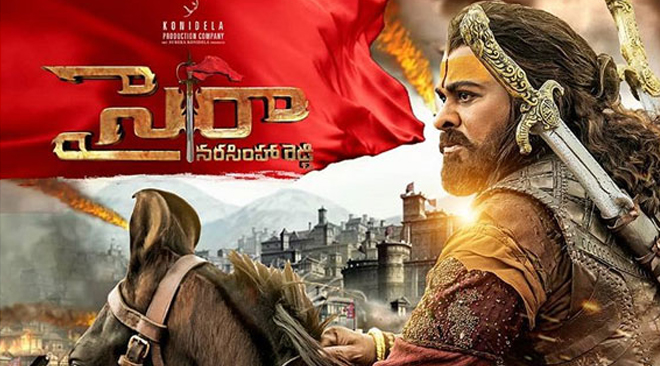 Cast: Megastar Chiranjeevi, Tamanna, Nayantara, Amitabh Bachchan, Sudeep, Jagapathi Babu, Brahmaji, Vijay Sethupathi
Crew:
Based on life story of Uyyalavada Narasimha Reddy
Story – Screenplay: Paruchuri Brothers
Dialogues: Burra Sai Madhav
Editor: Srikar Prasad Akkineni
Director of Photography: Ratnavelu
Screenplay-Direction: Surrender Reddy
Producer: Ram Charan
Runtime: 170:52 minutes
Historical fictions are not child’s play and the emotions imbibed in such a movie shouldn’t be artificial. Surrender Reddy and Paruchuri Brothers tried to add too much of melodrama to a tale that talks about a King’s self-respect that turned into a War with British. Unknowingly or Knowingly, he converted the ego war into a  freedom struggle but historians did not see his fight that way. Writers and filmmakers defer with them at that point and they tried to make it a huge freedom fighter’s story by adding sub-plots to an already goosebumps inducing tale.
Uyyalavada Naarasimha Reddy started a rebellion, according to reported history, because of the self-respect depreciating comments made by Raghava Chari (played by Raghu Babu in the film), who works for British. He challenged the rule of British, because they denied his right to be recognized as a Palegar and also legal heir of his grandparents. He was a very charismatic ruler for sure but he did not think about Indian Independence so much as the film depicts.
Well, as this is a fictionalised story about a real man’s fight against British, we can excuse this interpretation and move on. But adding things like his first wife Siddhamma (Nayantara) was away from him for 22 years and his love of life, Lakshmi (Tamanna) never married him. In reality, Naarasimha Reddy married three women and had kids with each one of them. He and Budda Vengal Reddy from same village were considered “Renati Surya Chandrulu (Sun & Moon of Renadu)” but we don’t see any scene or mention of Vengal Reddy in the film, even though he lived at the same time as Narasimha Reddy.
The emotional threads, the fights and over the top combat episodes all try to depict the ambition of Surrender Reddy and the free hand he got from the producer but they never gel with one another. When the scene is peaking with emotion, a sudden cut goes to someone in the crowd and then when the person re-appears there is a clear miss of lip sync. Even for Megastar Chiranjeevi, this is apparent and we fail to understand, why?
On top of that, every scene is filled with grandeur as the makers wanted to push the film as next Baahubali from Telugu Cinema, rather than using the right budget for right scenes and emotion. Except for few scenes involving Chiranjeevi, rest all of them feel like episodes taken from popular Telugu Cinema Commercial classic formats and stitched into this story, if they don’t fit exactly in the frame.
Ratnavelu worked hard, Production Designer worked even harder, Producer spent money and VFX, stunt choreography were very good. Still, the edit spoils fun in each one of them. It feels like there were many parts in the film that have been omitted to make it a shorter cut on the edit table. Also, Surrender Reddy’s non-linear structure in few scenes don’t really fit in properly when emotion had to be the outcome, a twisted shock inducing narrative is used instead of simple narrative that increases effect. Even if we take it as the most important tool of Surrender Reddy, in this movie such narrative smuggled the charm of it.
Megastar Chiranjeevi is phenomenal as Narsimha Reddy and he involved himself into the character, really well. But the director randomly cutting between shots, trying to go for an unsettled approach when a settled approach seems to be the demand of the scene, weakened the impact of Chiranjeevi’s effort at an age over 60 years. Director starts a scene slow, tries to build on it and then suddenly in random cuts he looks to end the scene. This kind of an approach made Vijay Sethupathy, Kiccha Sudeep, Amitabh Bachchan look like dummy dolls used as set props for market than for the story.
All-in-all, over ambition and very silly handling of some major impactful scenes ruin the overall impact. Still, Megastar Chiranjeevi holds the movie together, carries it on his shoulders like a professional that he is. Other than him, even he, did not get proper character arcs and closures as the screenplay tried to oversell the action sequences and diluted the drama to the core, expect for few well-realised scenes. It is watchable but you need to see it as a regular popcorn masala Telugu film but not as a film that tries to tell real story in a fictionalised fashion.
Rating: 2.75/5

Fight against virus far from over: Punjab CM