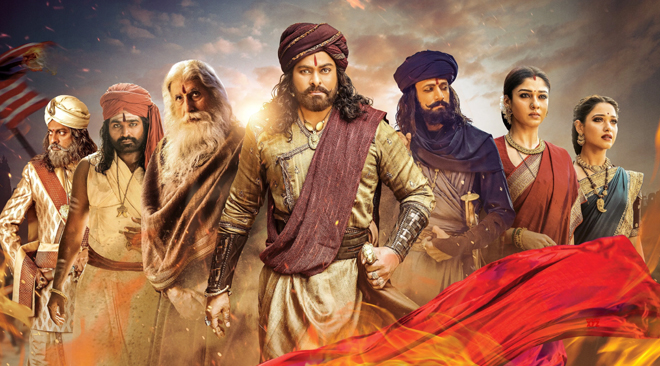 Umair Sandhu claims to be a part of UAE Censor Board and he has been putting out reviews and tweets about big action films from India. He never decimates any movie or he spreads any bad word about any film before release.
But he gives the first reviews of any film from India without fail and if they are very well known trending topics, he praises them to the sky. This is to say about his past tweets but not to dispose of his opinion on Sye Raa Narasimha Reddy, which he himself claims as First Review of the film as garbage or fake.
As we share one day before the release of the film, starring Megastar Chiranjeevi and Amitabh Bachchan, Sudeep, Vijay Sethupathi, Nayantara, Tamanna, Jagapathi Babu in important roles in the direction of Surrender Reddy, we advice viewer discretion in keeping you hopes up or down based on his opinions/ even ours that will be published on release day.
Here are the tweets, he posted on his handle and we did not edit any words, just removed some symbols and emojis;
“#SyeRaaNarsimhaReddy Review :
● #SyeRaa is a cinematic gem that you just cannot miss.
● Tremendous performances, deft direction, power-packed screenwriting and dialogue, melodious soundtrack and of course, the lavish mounting — this film has it all.
● Sure Shot HIT! “
“#SyeRaNarasimhaReddy from Overseas Censor! #Chiranjeevi is stupendous and clearly in top form. He holds you attentive right from the first frame till the penultimate moments. The supporting cast is top-notch, especially #AmitabhBachchan [terrific], #Sudeep [wonderful].”
“First Review #SyeRaNarasimhaReddy ! A film like #SyeRaa makes you proud that an Indian filmmaker dared to dream big and accomplished it. It is definitely not to be missed. Call it a box-office blockbuster today, but tomorrow, it will be remembered as a classic.”