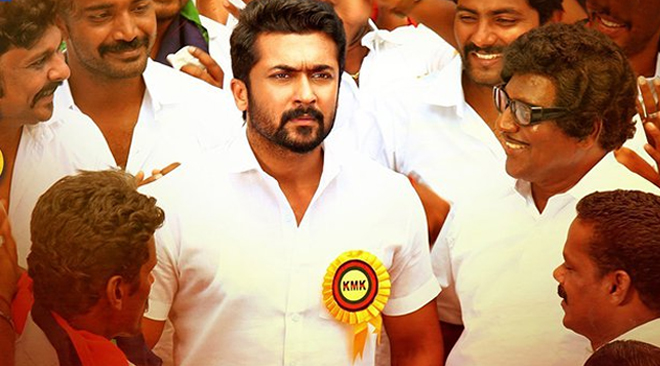 Cast:  Suriya, Rahul Preet, Sai Pallavi, Devaraj, Ponvannan, Bala Singh, Ilavarasu, Uma Padmanabhan
Crew::
Cinematography by Siva kumar
Edited by Praveen KL
Music by Yuvan Shankar Raja
Directed by
Written BY Selvaraghavan
First things first, it is good to see a Selva Raghavan film after eons, that too with a star performer like Suriya. In addition to him Sai Pallavi, Ponvannan and few more powerful performers in the cast, with a political drama at the core, I (critic or reviewer) thought the movie is a good receipe and a God-send to Selva sir after all the emotional turmoil he faced with Varna/Irandam Ulagam disaster. But again, Selva sir just made a caricaturist satire of his own idea.
Character moments, in the film, are the best comic pieces that a writer can think off ever. We still have him foreshadowing things, we still have him giving us moments that only he can but they are all small blessings in a mess. Right from first scene to the last, we can see that Selva wants to weave his own magic on things with an unique stamp. But how many times, can one pull a rabbit from the hat while they actually push us into an abyss? He had it as his speciality but he remained there and there only, not evolving much.
Look, I do get that the movie is not going to be regular when Selva Raghavan is writing and directing. I am prepared to give him occasional lapses too, as he could be rusty after 7 years of hiatus. But this film, seems like a half complete draft that an early days Selva Raghavan would have thrown out of the window and sat again for several drafts until all the emotional beats and character moments are rightly in place. Sai Pallavi’s hyper reactions, weird dialogue and Suriya’s over the top caricaturing just killed any nuance.
We know all the beats, clichés and even know the way characters are going to transform, the moment we see how the story establishes the main characters. Over-loving and trusting wife turning out to be an ever-doubting and nagging person, Parents trying to reject the idea of politics and then accepting his rise with glee before they hate him, A hint at physical relationship and a true believing hero turning to be the most cunning yet truthful person. All these troupes are common to any political drama and this one deels no different. One thing that could have made it different is characters but they fail.
Yes, characters just act as if they are in a cartoon than being real. Selva Raghavan always had the tendency to go over the board to tell his point in a weird way but he just made them too caricaturish here. Suriya gave the movie everything. He tried to make sense of odd things and even tried to play them with an enthusiasm and charm, that only he can bring to the table. All his efforts have gone down the drain as Selva did not give him enough material to play with.
Movie follows Suriya and Suriya only, hence no other character seems to have been written well enough. Plot is riddled with holes and Sai Pallavi is the first one to fall in the hole. NGK (Suriya) is an M-tech engineer who wants to live as a farmer and tries to help everyone around him. His wife, Geetha Kumari (Sai Pallavi) likes this and trusts him but she loves the smell of earth that acts as a natural colon of Suriya. But she suspects when that colon changes to an women’s famous perfume brand. She thinks he and political analyst, Vanitha (Rakul Preet Singh) are having an affair. Her reaction to it is the first hole in the script.
NGK transforms from a pure believer in goodness to a cunning person who is ready to even clean toilets of big politicians to satisfy their ego. While the line and the idea seem to be ambitious and good, Selva Raghavan leaves the ground and the plot nosedives further and further into an abyss of darkness. You can’t take Suriya being wasted like this by a maker, hence stay away!
Rating: 1.5/5