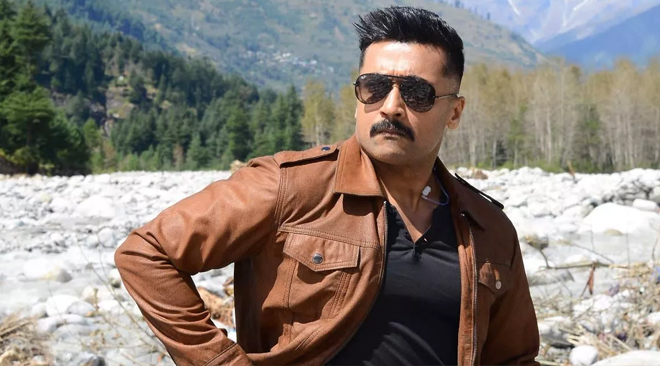 Cast: Suriya, Mohanlal, Arya, Sayyeshaa, Boman Irani, Chirag Jani, Poorna, and Samuthirakani
Crew:
Music Composed by Harris Jayaraj
Cinematography MS Prabhu
Edited by Anthony
Directed by K V Anand
Produced by Lyca Productions
Most consistent hero in South Indian Cinema is Suriya. Either good movies or bad movies, he gives them in cluster and cluster only. One feels so, after watching this Kaappaan/Bandobast. KV Anand kind of a director fails and struggles maintain pace of the film and logics too. He just reacted to news articles and tried to make a plot out of it. This one just drags on and on for eternity, at least we feel so.
Movie doesn’t have a plot to say so. We have seen these kind of films from 80’s where Prime Minister is a good guy and corporate companies are evil. This film is clearly an outdated take on politics and doesn’t even set the premise right. After a long time, we get to see songs that make no sense, characters that have no objective and scenes that go nowhere. How come Suriya, Mohan Lal and Arya agreed to do this film? Very hard to understand.
After all the mess, the end message of this movie is also highly convoluted and confused. It tries to tell that one Industry need not be sacrificed for another’s growth. Farmers and their issues with agriculture are very important problems, to deal with them in such comical way is totally a waste of opportunity. Suriya tried to tell same message that agriculture shouldn’t be neglected in NGK (indirectly) and now, in this film directly. He needs to reinvent himself immediately and hope his films does so.
This film looks so clumsy and so rushed that each scene seems to have been shot with a stopwatch and edited with axe of deadlines from producers. On the other hand, this is the only film that decided to make way for other big films and medium budget films for a free date with no competition. Seems like KV Anand himself lost interest after a point on the script and execution.
Suriya’s cluster of bad films hasn’t ended yet and we have to wait for the next cluster of good films or at least a sign of change. Until then, hope his market doesn’t go completely non-existant. Such a situation means, we won’t get to see his films on screen in their full glory, anymore. You can easily avoid this film.
Rating: 1.5/5