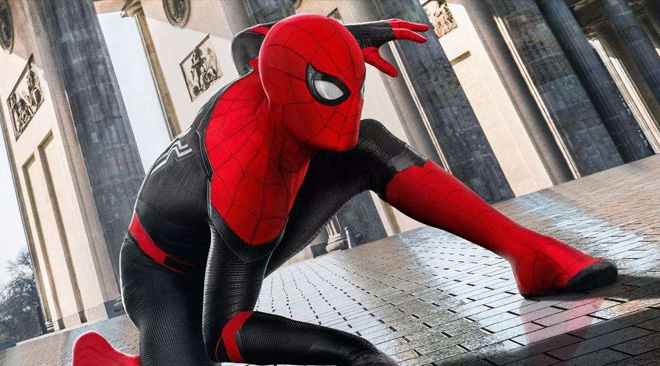 Cast: Tom Holland, Jake Gyllenhaal, Zendaya, Cobie Smulders, Samuel L. Jackson
Crew:
Music: Michael Giacchino
Cinematography: Mathew J. Lloyd
Editors: Dan Lebental, Leigh Folsom-Boyd
Writers: Chris Mckenna, Erik Sommers
Director: Jon Watts
Producers: Amy Pascal, Kevin Feige
Spiderman Homecoming established Tom Holland as a teenage Spiderman but did receive flak for being too slow in the second hour and too bland during the climax. Spiderman Far From Home changed that and it is paced better than the first one. Still does it make better than the first one?
Even though it doesn’t appear to be better than the first film, the movie doesn’t stop and try to establish everything you need to know. It keeps going giving you hints and dives deep into the theme of what if Superhero can become an in-direct villain to the next in the kin.
Well, when everything is going great and you are learning from every mistake, World seems to be falling more and more in love with you. Some look up to you and some try to understand you. If people who try to read you are smart and could figure out your formula, they can end up being a real threat to you and if not you, definitely your successor.
This movie tries explore that. It did take the first film’s set up where Tony Stark is shown as a person who is also making enemies on earth, this one brings in Mysterio or Quentin Beck who decides to take the opportunity of Peter Parker’s naivity and become a Superhero himself. So much so that, he tries to become a friend of Peter and creates big villains just to come close to him.
He lays everything wrong happened to him on Tony’s shoulders and tries to take vengeance for all that from Peter Parker, his successor. He, at first, starts the game as a hero and then slowly starts taking advantage of Peter and his high school problems. The formula for Spiderman, this iteration, is to make Avengers work or being an Avenger look a thankless job.
The real motivation to save someone should come within but it cannot be nurtured or developed over the time. While Avengers are past now, their successors have to find a way to save their legacy and also attack all the new threats that the technology they developed to save the earth, not fall in bad people’s hands while also attacking major villains. Fascinating.
Jon Watts seems to have understood the formula for a Spiderman movie better here. People are more interested in his story as a Superhero than his high school life and by trying to give to importance to superhero things, he did not undermine his actual story. He is still not at Sam Raimi level of dealing with everything perfectly but he is definitely figuring it out faster than we can expect.
May be the third one will be much better as premise set for it is far more complex. For this one though, he still did not receive from the mistakes thematically he did in Homecoming. He tried to use the villain better but did not give his character full blown arc from the first frame. He did give us some swashbuckling sequences with all the illusions but his motivation seems very random and his actions too. A bit more world building around his character and his motivation like Christopher Nolan could pull off in The Dark Knight or like in The Dark Knight Rises, this movie had all the ingredients to sit on the top creme layer of Marvel movies, yet it falls behind.  A great watch for the weekend.
Rating: 3/5