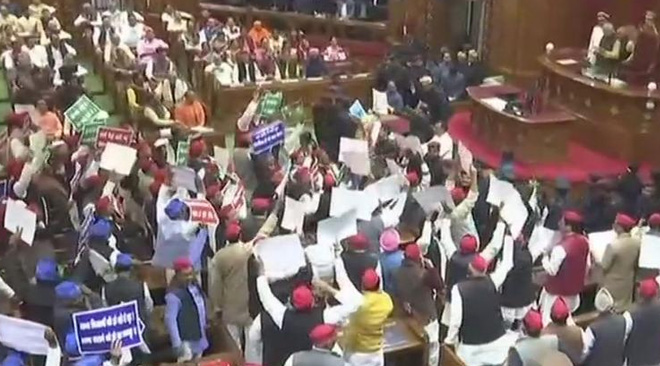 The opposition Samajwadi Party and Bahujan Samaj Party on Friday walked out of the Vidhan Sabha after Speaker Hriday Narain Dixit refused to allow a debate during Question Hour on “increasing atrocities on women” in the state.

As soon as the House assembled for the day, Congress members demanded the debate on the issue after suspension of rules and the SP members supported it.

Leader of Opposition Ram Govind Chaudhary said that the issue was of prime importance and that the police had started booking innocent women participating in peaceful protests against the Citizenship (Amendment) Act in the state.

The Speaker ordered for expunction of all remarks from the House proceedings and announced adjournment of the Assembly for 20 minutes.

Following this, Congress MLAs walked into the well of the House, with opposition members sloganeering against the Yogi government.

Parliamentary Affairs Minister Suresh Khanna stood up after the adjournment was announced and claimed that law and order in Uttar Pradesh had improved ”1,000 times”.

He accused the opposition of supporting criminals and said that the state government had always supported the victims.