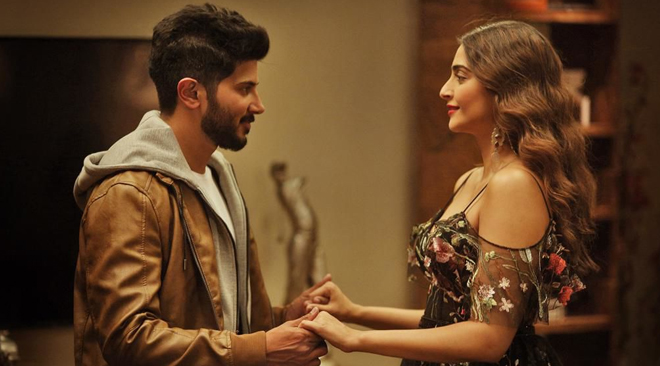 Cast: Dulquer Salmaan, Sonam Kapoor, Angad Bedi, Shah Rukh Khan (narrator)
Crew:
Adaptation of book, The Zoya Factor written by Anuja Chauhan
Written by Neha Rakesh Sharma, Pradhuman Singh, Anuja Chauhan, Pradhuman Singh
Music by Shankar-Ehsaan-Loy, Indrajit Sharma, Parikshit Sharma
Editing by Utsav Bhagat
Cinematography by Manoj Lobo
Directed by Abhishek Sharma
Produced by Pooja Shetty, Aarrti Shetty, Fox Star Studios
This movie got some good praise from critics and out of curiosity, we (our writer) took an interest to watch the film. But this time many chose to ignore the real irritating factor of The Zoya Factor, that is, a very very bad performance from Sonam Kapoor pitted against a charmer like Dulquer Salmaan. He lit up the screen and she just killed it. The chemistry was absent. There is no proper storyline to the whole film to seem as a gripping narrative.
Main conflict is ridiculed by the main character till second hour miraculously decides to make her even more dumb and lifeless by making her choose to believe in the very thing that she has been rejecting. Here, the conflict should have been internal and the contrasting change in herself should have affected her more than just someone saying that she is hurting the man, she loves. She actually wants to do it, then how come her pride in being able to win against him in one night change to realisation and resolution?
Luck is a very unbelievable factor and similar story was attempted in Kismet Konnection by Shahid Kapoor, Vidya Balan in the direction of Aziz Mirza. The director stopped making films after the movie. Now, the story needed to be told in an interesting way but all we get is three ad shoots, cricket stadium scenes that feel like EA sports game and some random quotes about love, luck and happiness.
Films these days are highly predictable as the writers are falling back on clichés more and more. Even breaking the 4th wall has become a cliché. When you have a lead like Dulquer Salmaan who has a huge range as an actor, not giving him even one scene that seems worthy of his time, is a grave disservice to him, his talent and even to the film.
On the flip side, Sonam Kapoor cannot carry a movie just on her shoulders. She needs support from all departments but here she had to rise above the script. She just lacks the vibe to quickly change her tone or make 4th wall breaking scenes more fun. She uses expressions A, B and C for everything in every film. There is no change in that as Zoya too. Her fashion sense too is quite awkward in the movie. Her character doesn’t seem to be such hip personality to carry off a slightly body hugging and revealing gown but Sonam wears it anyway, because she can.
Entire movie tries to focus on Sonam rather than the parts that are interesting. It doesn’t move at all from hotel lobbies and we feel claustrophobic even in an empty theatre. Movie just lacks any pacing, sense or any kind of narrative structure that we safely mount it on. Writers seem to have randomly written scenes and director helmed them even more randomly. You can skip this film as randomly as you skip intro, ads on streaming sights!
Rating: 1.5/5 ( just for Dulquer)