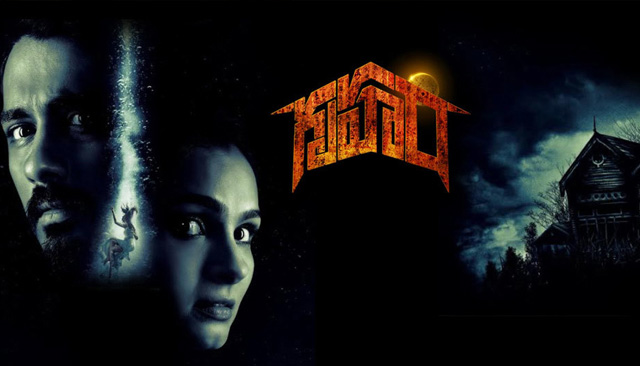 Whenever you buy a house, rather than looking at the price tag, sometimes you have to see the surroundings, know the exact details about the place to understand the complete history. Not every land has mysteries but some do have an inkling to come out at certain times as they have to unfold and correct the past mistakes. This is normally the theme of most horror films and Siddharth in his comeback film, Produced by himself makes an attempt to present it with a solid punch. Does the punch have enough power?

Krishna (Siddharth) is happy with his wife (Andrea Jeremiah) in a secluded location in Himalayas. Paul (Atul Kulkarni) move into their next door and it has a history as old as 80 years. The history is very scary and even the present events point us to the past and help us unfolding the mystery of what happened and why it needs to be stopped from happening now again.

Doctor Prasad (Suresh), a psychiatrist tries to aide an young girl, Jennifer (Anisha Victor), daughter of Paul. In his attempts to treat her he unfolds the major demon that is controlling the ghosts and why is it doing so, becomes more interesting. You have watch the events unfold on screen to completely unravel the mystery.

Siddharth is a committed performer and he proves that again. He doesn’t let his body language or his facial expressions deviate from the story that the director wants to say on screen. He carries the movie mostly as there are numerous sequences with him as the centre of attention even though it seems otherwise. He does perform well enough in scary scenes too.

Suresh gets a good character and he delivers an impact ful performance. He needed to be given some more material in the second hour to make even better impact. Anisha Victor holds the first hour of the movie on her shoulders and her performance gives the required punch to many scenes to make them not all clichéd.

Andrea Jeremiah, Atul Kulkarni deliver good performances and all others do the needful to help the movie.

Sound design is the major difference between world class horror films and mediocre ones. In Hollywood, most of the good horror films have great sound design and Gruham makers matched with that standards. Girishh scored back ground really well to enhance the fear factor.

Camera work too is easy on eyes. Shreyaas Krishna uses many colors to bring out the better impact. He adds many tones and lights up the house in such a way that we can feel the scary ambiance at the same time not cringe on the quality.

Editing by Lawrence Kishore is another backbone to this movie. He chooses to hold back the information very well, without much conflict of interest to the story. He also cuts the entire movie with the mysterious story telling in his mind and that works well for the suspense.

Writer and director, Milind Rau doesn’t really waste time he trying to set up everything. He is into the story with the opening sequences and doesn’t really try to give any chance to breathe once the meat of the scares is being served. But he fails in setting up the final twist in more proper and organic manner. Few off hand hints and indications does help for holding back the critical information but he doesn’t really nail the logic set by himself or do justice to the overall story as he overlooks following the character pattern after a point of time. Somehow, everyone speaks in same riddles and all appears to be happening in one direction only. The better execution and strong emotional core to the back story makes it easy watch.

Characters fail to be consistent

Lack of proper set up

Lack of movement in the story in second hour

Familiarity and lack of repeat value

When you walk into a horror movie, you are expecting yourself to fear out of your life. It is fun to let the fear of unknown take over for brief moment and then try to experience it again.  Hollywood films have been trying to master it every year but Telugu films haven’t been able to compete with them in standards. Gruham attempts to do so with all positives and negatives. It succeeds to a fair level and one can get good fear-ful experience watching the movie.