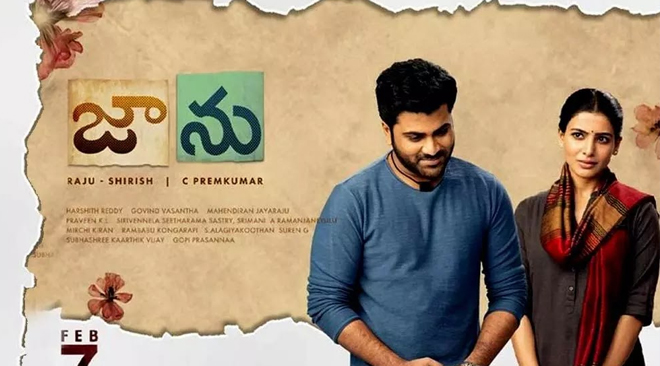 Cast: Sharwanand, Samantha Akkineni, Vennela Kishore, Sharanya, Sai Kiran, Gowri G. Kishan
Crew:
Edited by Praveen KL
Cinematography Mehendran Jayaraj
Music by Govinda Vasantha
Written & Directed by Prem Kumar
Produced by Dil Raju
Runtime: 150:59 minutes
CBFC: U
Sharwanand and Samantha Akkineni never did a film together. They finally came together for a love story,  96 remake. The movie became a cult love story in Tamil and the same team has executed the movie in Telugu too. Did they bring the same magic to the Telugu version too? Did they change anything? Let’s discuss …
According to the story, Alumni of 2004 batch from St. Aloysius decide to meet after 17 years. There, Ram (Sharwanand) and Jaanu (Samantha), who fell in love in their 10th standard, meet again. What happens next? Why did they had to stay away from each other for so long? Watch the movie to know ..
Sharwanand did try to give his own touch to few scenes but we believe he followed Vijay Sethupathi, a little bit more than he should and very religiously at times. May be a different person behind the camera or even a person asking him to try his own take might have given this movie a new flavour. Still, he tried his best. Samantha Akkineni seems to have been going slightly more and more wooden. In this role, she did try her best but somehow, her cheeks seemed to never move at all. Varsha Bollamma, Sharanya, Vennela Kishore leave an impact. Gowri is a find and she did bring the same magic as in original, here too. Sai Kiran, unfortunately, couldn’t leave an impact.
Praveen KL executed the scenes similarly like he did in the Tamil version. So much so that, even the length of the shots doesn’t change from original. Mahendran Jayaraj frames match the original well too. Govinda Vasantha should have worked with lyricists in Telugu to get the flow in Telugu language right. The lyrics and tunes feel like they have been directly used from original with just a language setting change, which could have been worked on.
Writer-director Prem Kumar is surely a good technician and a story teller but his style needed few tweaks here and there, to deliver another version of the same film. Had he approached it that way, there would have been a challenge for him to execute. This one seemed too easy for him and at times, we see that he went with the flow than trying as much as he did in the original version. Still he maintained his quality, that is appreciable.
Prem Kumar came up with similar scenes and shots even for the remake. In fact, the producer might have asked him to re-execute his script in Telugu and he did exactly same. This doesn’t give you the feel that the actors are from the place which they are saying, as writing doesn’t add that native flavour to keep it universal. May be that would have given the film, a different look in Telugu even for those who have seen the original, to say that this is worth-a-watch. Actors here, try to behave similarly like the original actors and at times, for those who have seen original, it subconsciously force them to draw comparisons. On the whole, the movie could have worked really well had few changes are made as there is a strong feeling of the movie being remade even though there is an effort to tell the story, in the Telugu version too. Watch it at your leisure.
Rating: 2.75/5