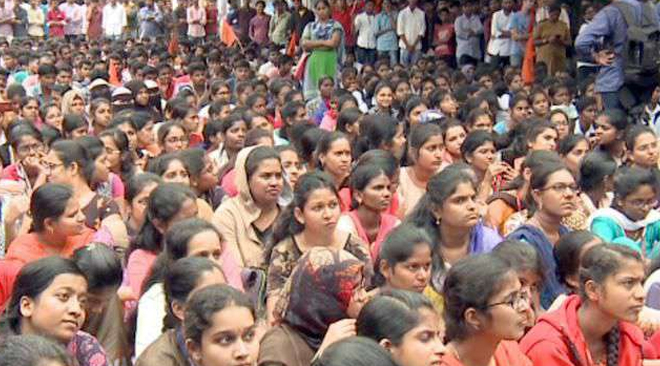 The city police on Tuesday heightened security at the Cherlapally central prison here, where all the four accused involved in the gruesome rape and murder of a woman veterinarian have been lodged.

An additional police personnel was deployed and orders banning assembly of five or more persons near the jail premises were imposed to prevent any protest.

The move came a day after five persons carrying banners gathered near the jail, demanding the death penalty for the perpetrators of the heinous crime.

Police patrolling vehicles were seen in front of the prison, located on the road leading to Cherlapally industrial zone on the city outskirts.

With the police filing a petition in a Shadnagar court, seeking the custody of the accused of further interrogation, additional security measures were put in place to prevent any untoward incident.

A police officer said they did not want to take chances in view of what happened at Shadnagar police station on November 30. They had a tough time handling protestors outside the police station, about 50 km from Hyderabad, who were demanding immediate execution of the accused.

Later, doctors were called to the police station for medical examination of the accused and when the number of protestors swelled even the magistrate had to intervene to send the accused into judicial custody.

Police, however, had to resort to baton charge and make elaborate security arrangements to shift the accused from police station to the Cherlapally prison.

The four accused, Mohammed Ali alias Arif, J. Naveen, J. Shiva and Chennakeshavulu, have been kept in separate and high-security cells, meant to house those accused in terror cases.

No one has come to call on the accused during the last three days. Jail authorities are also taking all precautions to ensure that the accused don’t have access to anything which helps them to commit suicide.

The 25-year-old veterinarian was gang-raped and murdered by four truck drivers and cleaners near a toll gate on the Outer Ring Road at Shamshabad on the outskirts of Hyderabad on November 27.

According to the police, they trapped the victim by deflating a tire of her Scooty when she had reached the toll gate at around 9 p.m. to pick up her vehicle, which she had parked earlier before boarding a cab to visit a dermatologist in the city.

After killing the victim, they carried the body in their truck near Shadnagar town and set it ablaze.

The incident has triggered public outrage across the country. Protests were continuing in Hyderabad and other parts of Telangana, demanding immediate death penalty for the guilty.