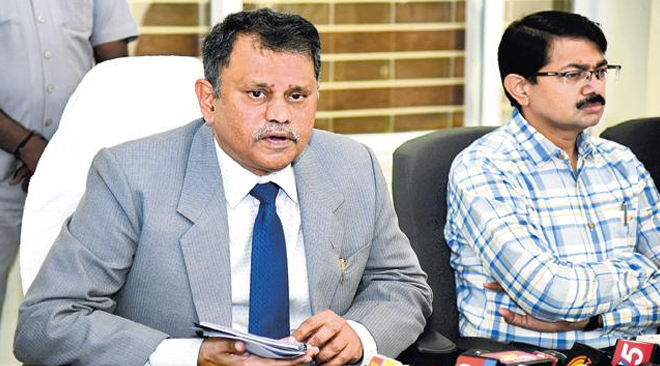 The State Election Commission has postponed the local body elections citing coronavirus as example, but Goa has been conducting the civic polls by taking effective steps which shows that there is are motives behind the decision to put off the polls, YSRCP has said.
Speaking to the media at the Party office here on Tuesday, MLA  Gopireddy Srinivas Reddy said that SEC Ramesh Kumar seems to have colluded with Chandrababu Naidu and postponed the elections taking the name coronavirus. Goa which witnesses a lot of tourists and floating population is having elections on March 22, but here in AP, they postponed the elections which were scheduled around the same date. TDP propagating machinery has raised pitch against the government stating that we are more concerned for elections rather than public health only to cover up their failure to even get contesting candidates.
In fact, our government has taken all the required measures to control the virus in the State, all the hospitals are equipped with isolation rooms, awareness programs are taking place and through volunteer system, door to door surveying is also being done. If the elections are held, all these elected people would add strength to the government and local bodies would be strengthened which makes it easy tackle coronavirus.
The MLA further stated that in a majority of the cases, based on the immunity, the virus gets cured much before it gets diagnosed. Only five percent of the cases require hospitalization and less than three percent of the cases will succumb. Medical experts across the country also stated that paracetamol is the sole drug that is used in the treatment of fever caused by viruses. But Chandrababu Naidu is making fun of the government.
“The mindset of Chandrababu Naidu has not changed yet and he still thinks that he is the most intelligent person on this earth and everyone has to learn from him. Fearing defeat, Chandrababu played his cheap politics and postponed the elections creating hurdles for the government,” he said.
In the US, two cases were registered in the first week and 105 in the second week and 613 in the third week. In France, only 12 cases registered in the first week and 105 cases in the second week. Similarly, in Iran by third week 4747 cases were registered and in Italy, 1036 cases have been recorded. But in India, in a span of three weeks, only 114 cases have been registered and it is being controlled effectively