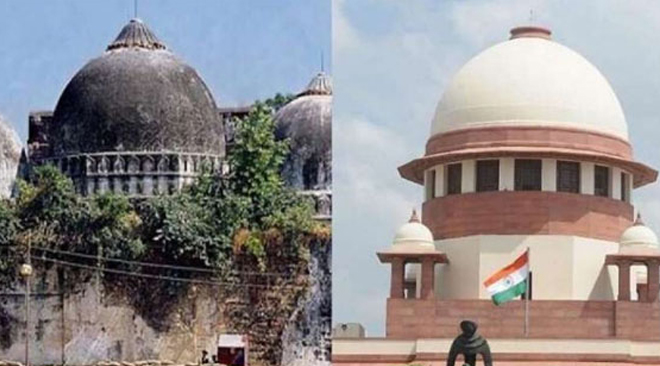 In a historic judgement in the sensitive Ayodhya land dispute case, the Supreme Court on Saturday directed the Centre to form within three months a trust which will build a temple at the disputed site.

The Sunni Waqf Board, which was a party to the 7-decade-old title suit, should be given an alternate five-acre land at some other suitable place for construction of a mosque, a 5-member bench headed by Chief Justice Ranjan Gogoi, said in a unanimous judgement.

The court said the title of the land can be decided only on legal advice.

The top court ruled that the Allahabad High Court verdict of 2010, giving land to the Sunni Waqf Board and Nirmohi Akhara, was wrong.

It rejected the claim of Nirmohi Akhara of being a ”shebait” (a devotee who serves the deity).

The Supreme Court, however, said that in the board of trustees, appropriate representation should be accorded to Nirmohi Akhara, even though its suit was dismissed.

The bench upheld the report of Archaeological Survey of India (ASI), which concluded that a temple existed at the disputed site.

There is clear evidence the Hindus believed Ram was born at the disputed site, it said.

There is evidence that ”Ram Chabutra” and ”Sita Rasoi” were worshipped by Hindus before the British came, the judgement said.

The court said travelogue and gazetteers cannot be the basis of adjudication of the title and that the nature of worship offered by Hindus over the years proves that they had always believed that Lord Ram was at the site.

Documents of 1856-57 show that Hindus were not obstructed from worshipping there, it said. Outer courtyard has been under exclusive possession of Hindus over the years, the court said.

The bench said Hindus consider the disputed site as the birthplace of Lord Ram and this belief is beyond judicial scrutiny.