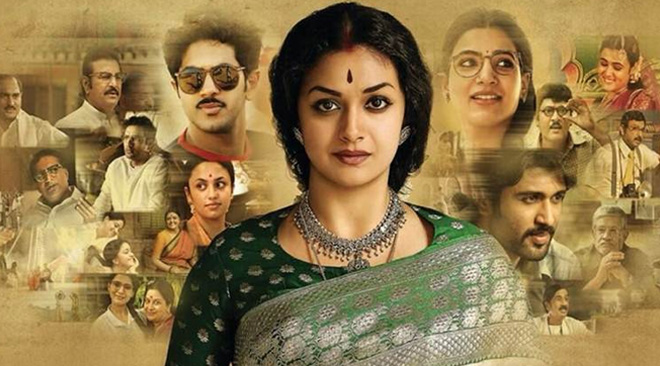 Giving tribute to a legend is never easy. You have to see their story and feel it as real as you can to connect with them. There is no place for superficiality here. The masks of on-screen persona needs to be removed and real people, however they are should be presented as objectively as you can. It is a difficult process and hence, biopics are not attempted in Telugu, so much. But the memory of Savitri gets a great tribute in Mahanati

There is nothing that we can tell you separately as story of this film. This is the journey of Madhuravani (Samantha Akkineni) realising the importance of loving and living life, by embracing the truth, while exploring the life of Savitri. You have to watch the movie on screen to know other details …

Keerthy Suresh is the backbone of this film. She lived like Savitri on screen and became her. Her style of dialogue delivery and acting skills have been put to major test and she excelled. For some parts, she was able to make believe that she is Savitri. This is lifetime achievement.

Samantha Akkineni got a great career moment in this film and she excelled in that scene. Dulquer Salmaan is another pillar for the film. As Gemini Ganeshan, he makes us believe that he is the real person and his charm on screen is as charismatic as Kadhal Mannan, himself.

Danny Sanchez-Lopez’s cinematography has all the elements to make us believe in the movie. He had to bring the glory period of Telugu and Tamil Cinema to life, while keeping it all relative to today’s world too. His work is flawless in many scenes and we have to appreciate his sense of blocking and staging in this film.

Editing by Kotagiri Venkateswara Rao is good but he could have improved on few scenes. The way he cut some in the last parts of the film, especially, could have been better. Still, he did a good job.

Music by Mickey J. Mayer is his career best. He is able to involve in the story and deliver the apt tunes for right scenes. Even his background score is highly emotional and involving.

Sai Madhav Burra got a lifetime opportunity with this film and he utilised it really well, by being true to the characters of the legends.

Nag Ashwin, needs to be credited for being honest with the film. He did not try to manipulate and make someone in the story a villain and someone a hero. He looked at the story of Savitri as a lover who loathed for affection through out her life. She found it but still, she couldn’t keep it with her for a lifetime.

She had a character and voice that we need to hear and understand. Nag Ashwin caught it and presented it from the perspective of another young woman who is ambitious and career-driven. His skill in telling the story is great and his penchant to be honest is commendable.

Performances of all the actors

Length of the movie

Savitri is a painting drawn by God or Nature on celluloid through the lens of many greats. She always wanted to be loved but her life took many dark turns than she could handle. The situations did not let her recover and even trusted people left her hand when she needed.

Still, she managed to survive all the odds and tried to fight her way to be normal again. Nag Ashwin gave a tribute to her with the support of all the cast and crew. This is a great artistic tribute to Savitri and even if he decides to give tribute to another legend, he may not be able to pull it off. Every Telugu Film lover needs to watch it once.