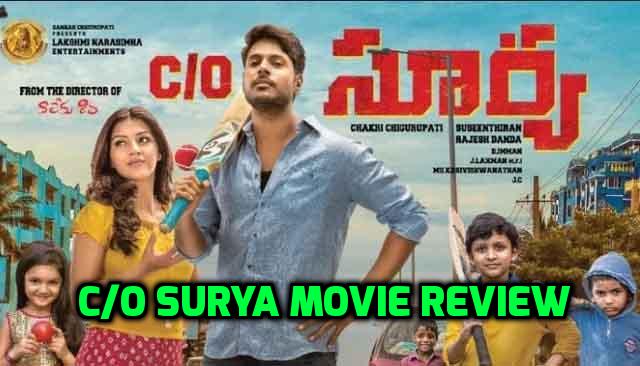 We always need a person in our lives who can give an assurance, a security. For any family it is the head of the family and that could be the elder son or father figure. But can a friend say, he has a friend who can do anything for him? Can he be assured and secured for being a C/O…?

Surya (Sandeep Kishan) loses his father for a doctor’s negligence. His sister Anuradha decides to become a doctor and help people. But there is a problem here,  her mother (Tulasi) doesn’t approve her love towards Mahesh (Vikranth), a dear friend of Surya.

Samba sivudu (Harish), a local thug enters into their life. He first appears to have targeted Mahesh but there is a twist here. Whom did he target? Why Surya gets involved into the scheme of things? What is the ending of this cat and mouse game? Watch it on screen to know more …

Sandeep Kishan delivers a good performance as Surya. He is believable in the way he looks and reacts too. Vikranth doesn’t really come off as a good actor. But he doesn’t burden the movie.

Mehreen Prizada looks good but she doesn’t have a character. Harish Uttaman gives a menacing performance but he needs even more spice to deliver a memorable performance.

Satya, Girl who acted as Anuradha, Tulasi do good job in their characters.

D. Imman once again delivers a good back ground score to a Susheenthran film. But he uses one tune through out the film. Even though it is good, too many repetities hurt our ears. We don’t have to even mention songs, they are that forgettable.

Laxman Kumar’s camera is very good in chase sequences. He gives a tone to the entire film and it is highly common for a Susheenthran film and we can’t complain much about or even praise it.

Kasi Vishwanathan edits the movie well in the second hour. The racy hour needed crisp cuts and he aptly provides them. But the first hour doesn’t have enough material to sustain intrest and he needed to take care of that.

Susheenthran follows a pet formula. Create characters in the first hour give a twist in the interval and then in the climax show the middle class hero triumphing against a don who appears to be menacing and highly dangerous. He follows the same here too. Hence, the predictable screenplay gets too vague and similar from every film of his. Been there, seen that feeling of fatigue dilutes the impact.

Action sequences in second half

Twist in the interval

Fatigue from similar kind of screenplay and stories.

The greatest heist a filmmaker can pull off is to say the same story twice or thrice. But few filmmakers say only one time and again. Just like Puri Jagannadh, who after Pokiri, made another version of Pokiri with every actor, Susheenthran tries to make Naa Peru Shiva with every other actor. Sundeep Kishan’s version lacks the finesse of Palnadu and freshness of Naa Peru Shiva.