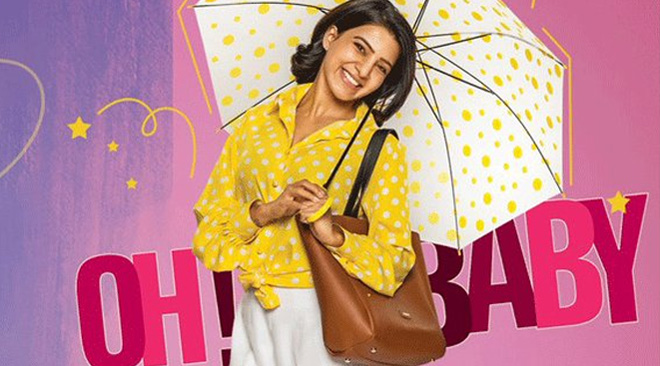 Star Cast: Lakshmi, Rajendra Prasad, Samantha Akkineni, Rao Ramesh, Teja Sajja, and Pragathi
Music Composed by Mickey K Meyer
Cinematography by Richard Prasad
Film Editing by Junaid Siddiqui
Written by Lakshmi Bhupala, Nandini Reddy, Gopi Mohan (script advisor)
Directed by Nandhini Reddy
Produced by People Media Factory, Vivek Kuchibotla, Suresh Productions
Nandhini Reddy as a director faces a major problem in deciding whether she has to go Over the Top, in your face kind of narrative or subtly one. She tries to handle her story in both styles and that confuses a viewer to the core. For example, Samantha Akkineni’s introduction scene from the movie starts out as a scene that a director with subtly sensibilities like Bapu would have handled and ends as a scene that a novice would have handled going over the top unintentionally funny route.
This kind of mixture hurt her films from the start and now, Oh Baby suffers badly because of this. Suddenly, we see a scene where Rao Ramesh is talking like he belongs to a Trivikram Srinivas universe and then, the next scene happens in a Kodi Ramakrishna universe of comedy. Tonally, the movie is inconsistent and heavily self-depricating. It works in parts where the emotions come out and mainly when Lakshmi, Rajendra Prasad on screen and then fails to sustain even though Samantha is ably giving her best.
The cut seems to be like a rushed version than a seamlessly edited finished product. Not because of the editor but because of the director, who couldn’t really maintain a consistent flow. She drags few parts who don’t provide the hilarious laughter as she expected and even some emotional scenes to enter the over melodramatic zone as there is a settled pacing or correct distribution of screen time for all elements to come together.
Some editing choices seem to have come out of a musical video than a film, which wants to be taken seriously at least for those 2 and half hours plus, runtime. This film had all the themes in rhythemic order and it could have hit notes perfectly too. It fails to really invest us in the characters than giving us moments. Such moments too work because of actors but not the material.
This film belongs to Samantha, Rajendra Prasad and Lakshmi as they deliver very ernest performances understanding the characters. Rao Ramesh got the well-written parts and he did great. Rest all seem to be in Telugu TV serial mode than in a film.  Overall, movie works because of the performances mostly whereas its premise and strong narration should have made it an absolute fun to watch. You can watch it one time with difficulty.
Rating: 2.5/5