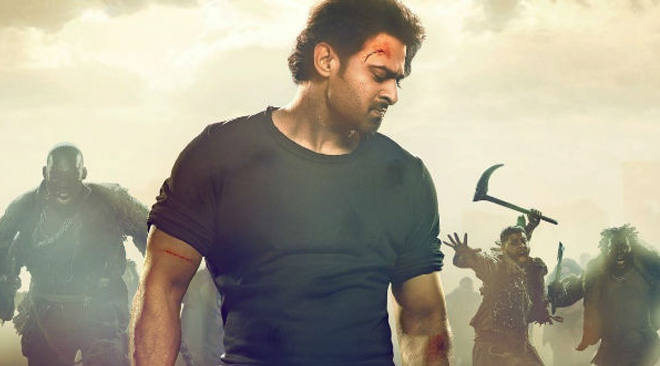 Star Cast: Prabhas, Shraddha Kapoor, Jackie Shroff, Neil Nitin Mukhesh, Arun Vijay, Murali Sharma, Evelyn Sharma, Mandira Bedi and Vennela Kishore
Crew:
Music Composed by Tanishk Bagchi, Guru Randhawa, Badshah, Shankar Ehsaan and Loy.
BGM by Ghibran
Cinematography by R Madhie
Edited by A Sreekar Prasad
Directed by Sujeeth Reddy
Produced by UV Creations
Saaho is one of the most awaited movie of the year. Prabhas came up with this film, after 2 years gap. Baahubali-2 made him a Pan-India Star and he showed his stamina with the advance bookings for the film all over India. Sujeeth directed the movie and wrote it too.  UV Creations produced the movie on a huge scale of Rs. 350 crores.
The movie starts off with a comic sequence and an introduction fight that doesn’t really elevate heroism. We see randomness in the screenplay instead of character moments. Run Raja Run did not have such big hero or huge budget, so it could survive with a comedy track and a twist. But when Prabhas is coming after a movie like Baahubali-2, this kind of a silly story doesn’t work on him.
Ajith’s Gambler/Mankatha, Vedalam had a better screenplay that engages an audience member even with a screenplay that is based on twists and hero being anti-normal social conduct. We tend to connect with the story more because we fall in love with the character than the surroundings. Saaho tries to be such film without trying to give any moral statements.
We can also see a tendency to hype up simple sequences as if they are the best possible ones for the story and film. We can also see many English, European films taken as references to execute the movie. There is a difference between needed grandeur and putting up grand sets just for the sake of it.
Sujeeth, UV Creations just went ahead with adding elements to scenes that show grand sets but they missed the point in giving those scenes a meaning. It feels like an ameteur who is learning to swim in a pool tried to swim across English Channel thrice. None of the elements work and this is just a huge waste of time, money on large proportions.
Prabhas needs to take care about his looks and this movie seems like he just gave up on looking good on screen. But he worked on his body building. Shraddha Kapoor seemed clueless for most part of it. All others also couldn’t really do justice to their roles. This is a predictable fare that we have seen many times before and the presentation is even bad. You can skip it without any doubt.
Rating: 1.5/5