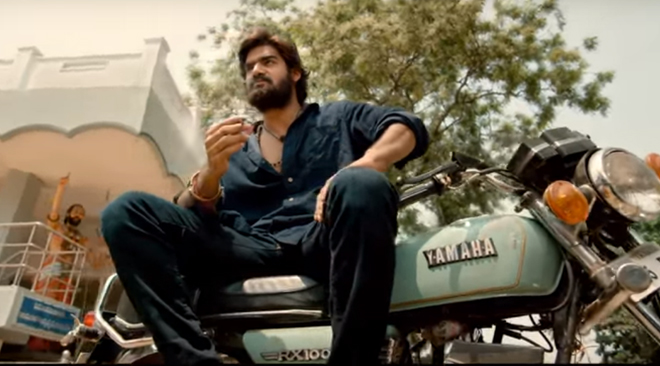 Nature is the true witness for anything that happens around us. Not just living but non-living things too can become witnesses to a story. A bike called, RX-100 becomes witness of a love lust story of two youngsters who are driven sexually and emotionally, in respect to their feelings. This story has all emotions but does it have enough for us to really connect to it, let’s discuss …

Shiva (Karthikeya) always likes to live like a loner and has a deep pain in his heart that only he can understand. His love interest Indu (Payal Rajput) falls for him at first sight and he is slowly driven to her, in other ways, he is seduced towards her.

They keep meeting each other and have many sexual encounters with each other at regular intervals. Daddy (Ramki) warns Shiva about the relationship and ZPTC, father (Rao Ramesh) of Indu decides to send her to another country by marrying her. She doesn’t hesitate. Shiva waits for her in self-loathing! Why did she do so? What happened to Shiva? Did she return, if she did, what happens next? Watch the film for answers..

The protogonists of the film Payal Rajput and Karthikeya make their Tollywood debut with this film. Karthikeya needs to work on his histrionics and dialogue delivery skills.

Coming to Payal Rajput, she wins the battle hands down with her pretty looks and performed very aptly in her purview.

Rao Ramesh tries to give his best, but it isn’t the character that could do full justice to his talent. Seeing Ramky on Telugu screen after a long time is a delight, but the script doesn’t help him much.

Cinematography by Ram and his framing place a range of visual challenges before the viewer that adds the interesting / weird feel that dally throughout the film.

Music  by Chethan Bharadwaj is too good and adds to the flow of narration. The BGM is also good.

Praveen KL’s  editing is fine in the latter half, but fails to keep the track in the first half. He could have made a better cut and choice of shots in the first half to keep it even tighter.

Dialogues by Ajay Bhupathi are loud and fails to properly communicate emotions through characters. He just tries to linger around one point and be point only, seduction and lust. As a director too, he doesn’t really try to add depth to characters with the setting. He plays well through the latter half but until then he just moves around the village with  Shiva, in an attempt to make you feel his pain, but fails miserably. Apparently, the biggest advantage of R X 100 is the shoestring budget it’s made upon and the buzz the trailers created.

The movie is a lust story rather than a love story. There is slight difference between seductive touch and touch of love. If you can’t really understand that then your life could end up as a hell. This is the story of the movie that writers aims to tell but maker made it more memorable for the intimate scenes than hard-hitting writing. Collections might be high but as per content the film finds itself lacking.