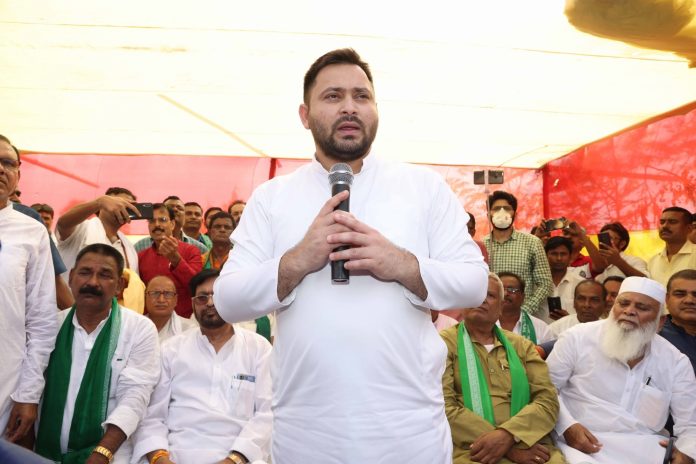 The Rashtriya Janata Dal (RJD) has expressed apprehension that there may be rigging during the counting of votes in the Bihar bypolls, held in Kusheshwar Asthan and Tarapur on October 30.

The party has sent top leaders Tejashwi Yadav, Jagadanand Singh and Shyam Rajak to monitor the developments at the counting centres in a bid to prevent wrongdoing by the ruling JDU members.

Tejashwi Yadav and Abdul Bari Siddiqqi are on the way to Kusheshwar Asthan in Darbhanga while Jagadanand Singh and Shyam Rajak have been sent to Tarapur in Munger district. They will camp outside the counting centres.

Chitranjan Gagan, spokesperson of the RJD, said that the party will launch mass protests if Nitish Kumar and his party members apply pressure on the district magistrates and other officials at the time of counting to favour JDU candidates.

“In the 2020 assembly elections, around 15 seats were such where RJD candidates were winning but Nitish Kumar and BJP leaders asked district officials to defeat RJD candidates. Phone calls were made from the chief minister’s residence,” Gagan said.

“We have given special training to counting agents and candidates to keep a close tab on officials during counting of votes. In case of any rigging, senior officials should be informed immediately. We have asked RJD members and supporters to prepare for an agitation if any kind of wrongdoing is done by government officials at the counting centres,” Gagan said.

RJD chief Lalu Prasad has already claimed victory for both his candidates. He also claimed that a formula is ready to dislodge the Nitish Kumar government after the bypoll results.

The by-elections held on October 30 at Kusheshwar Asthan and Tarapur registered 49 per cent and 50.05 per cent voting respectively.