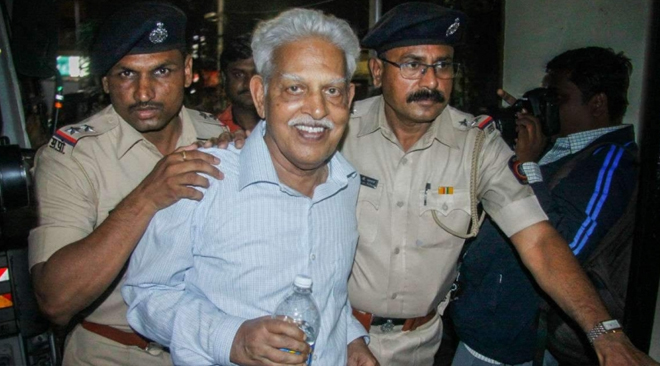 Revolutionary Telugu poet and writer Varavara Rao, who is in judicial custody in Maharashtra in the Bhima Koregaon case, has been admitted to JJ Hospital at Mumbai, officials said on Friday.

Hyderabad Police Commissioner Anjani Kumar said on Friday night that his family is being informed to family members and necessary passes are being issued for them to travel to Mumbai.”We are coordinating with agencies at Mumbai,” the Police Commissioner tweeted.

The news of Varvara Rao”s admission to hospital came on a day when rights activists and his family members staged protests at their respective residences in Hyderabad and other parts of Telangana demanding the immediate release of Rao and Delhi University professor G.N. Saibaba. They voiced the apprehension that the activists may be facing the threat of coronavirus in jails.

Varavara Rao”s wife Hemalatha and daughter Pavana staged a three-hour-long protest at home, holding placards for release of the 80-year-old who was arrested in November 2018.

Two days ago, Varavara Rao”s three daughters had written a letters to the Governor and Chief Minister of Maharashtra, and Chief Justice of Bombay High Court, demanding his release on bail or parole.

“Our father is aged 80 and ailing with multiple health issues and highly vulnerable to be affected by coronavirus. During the last eight weeks of lockdown, we were not allowed to visit him in jail and even the usual correspondence was also disallowed,” wrote Sahaja, Pavana and Anala.

Rao, leader of Revolutionary Writers Association (RWA), is currently lodged at the Taloja jail at Navi Mumbai, which reportedly saw the death of a prisoner due to Covid-19.

“The lawyers were also not permitted to visit him. We have been extremely anxious to find out his well-being and during these eight weeks, he was allowed to make phone calls for three times to speak to our mother, who is also ailing and 70 plus. Even the phone conversation was allowed only for two minutes.”

The Forum against Suppression (Nirbandha Vyatireka Vedika), Telangana had given call for the protest on Thursday. Vedika convenor Professor G. Hara Gopal, other office bearers Professor G Lakshman, M Raghavachary, S Anitha and K Ravichander and others held protests outside their houses.

Hara Gopal said Saibaba had been facing health problems in Nagpur jail and his mother too is ailing. He said Coronavirus is prevalent in Mumbai jail where Varavara Rao had been lodged for over 18 months. He demanded that Rao be released on bail on parole.

Leaders of the Indian Journalists Union (IJU) and Telangana State of Union of Working Journalists (TSUWJ) had also urged the Maharashtra government to consider releasing Varavara Rao on parole, keeping in mind his health condition and Covid-19 situation in the state.

Last month, a group of poets from different languages, including Gulzar, had sought the immediate release of Varvara Rao.

His name surfaced in the case following the arrest of the lawyer Surendra Gadling. A letter, allegedly penned by Rao, was recovered from Gadling.

In a representation to Prime Minister Narendra Modi, Gulzar, along with 40 poets, sought the release of the 80-year-old Rao in view of the health emergency in the country.

A copy of the representation was also submitted to Maharashtra Chief Minister Uddhav Thackeray and the National Human Rights Commission.

“Varavara Rao, renowned poet, writer and harbinger of change in modern Telugu poetry, eighty years of age, runs a high risk of ailment considering his age, deteriorating health and the crowding situation in jail. Vernon Gonsalves, a fellow prisoner, had sent a message to the advocate drawing attention to the worrisome health condition of Rao. In this context, we see the plea for help with utmost concern,” the representation read.