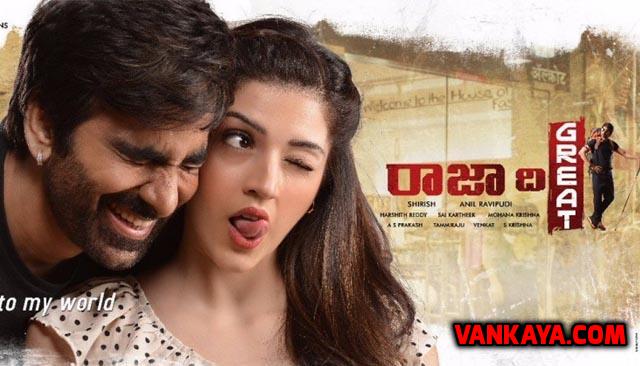 Can a blind man be a saviour? Well, such a thought never came across my mind till now but it seems we can assume if he has talents of Raja or at least if he has Anil Ravipudi writing his story. Let’s see if the movie really holds up to the promise with Mass Maharaja Ravi Teja as a blind person, Raja The Great.

Raja (Ravi Teja) is a blind man from by birth and as it is a genetic disorder, he can’t be healed. Without losing his wits to blindness, Raja makes himself extra sensitive and develops skills to detect a threat and eliminate it. Hence, he gets a name Raja The Great.

A honest police officer, Prakash (Prakash Raj) kills the local thug Devraj’s brother. Trying to avenge his death, Devraj (Vivian Bathena) tries to kill his daughter Lucky (Mehreen) and also each and every person in the team of the police. Unable to save themselves, the police officers group protects Lucky before their death. Lucky is sent to Darjeeling with Raja The Great as the protector. Did he succeed in protecting her? If so, how? You have watch it on screen..

Ravi Teja is coming after a gap and he looks really fresh in this movie. His voice sounds fresh and his mannerisms and energy are back. He entertains us with simple expressions and his way of delivering a punch is really a delight. The break seems to have worked for him.

Radhika Sarath Kumar’s role is too routine to write about but she managed to evoke some laughter within the space provided. Her character needed to have some more depth to really root for the hero. Mehreen looked out of shape in this movie. But within the space she had she gave an acceptable performance.

Srinivas Reddy, Tanikella Bharani  did not have much to evoke laughter.  Rajendra Prasad and Sampath tried their best but we feel sorry for them rather than enjoying their effort.

Music by Sai Kartheek is very routine and we only enjoy the title song. He had few situations to really experiment but he did not use it completely.  His back ground score is too loud and doesn’t really sink in with the story tone.

Camera work by  Mohana Krishna is decent enough to talk about. But the director did not give him much scope to experiment. With a landscape like Darjeeling to explore, the scenes or the script doesn’t really help the cinematographer to use his skills more. It is just a routine job for him and he dies it in the same way.

Editing is done by Tammiraju is highly routine and at places odd too. He seems to be rushed to cut the film and few cuts here and there doesn’t really help the flow of the film.

Writer and Director Anil Ravipudi doesn’t really shine with this story. Even though he has a good actor and character, he doesn’t really go into it deep. He finds routes to simplify a complex situation like Blind man attacking goons but his lack of imagination and necessity to play for the gallery harms him much more than helping him.

He needed to dwell more into the details while making action sequence not to make them look really routine. He does have a mass pulse but he needs to hold it back too as his characters could suffer for his over indulgence into the comedy not caring for any character development.

Movie is more about Ravi Teja and director tries to make it look like a celebration rather than touching the gritty reality behind him. He just asks us to believe the character is blind but doesn’t really care about getting the nuanced performances from his cast.

The script and situations doesn’t allow too. On the whole, a lacklustre attempt that pokes fun at everything that a blind person goes through on a daily basis in the name of being different. It fails to even stand up on his own promise, entertainment.