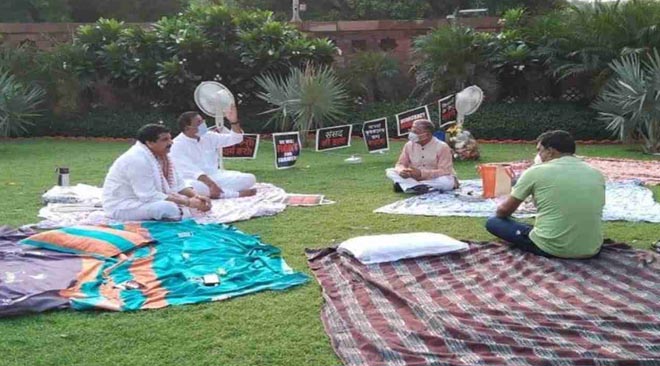 The suspended eight MPs of the Rajya Sabha, who were all night sitting in the Parliament premises to protest against their suspension, had a surprise visitor on Tuesday morning. The Deputy Chairman of the Rajya Sabha Harivansh Narayan Singh brought tea and snacks for them.

The eight suspended Rajya Sabha members have been camping near the Gandhi statue in the high security Parliament House premises, protesting against their suspension after Sunday’s unprecedented ruckus inside the Upper House.

Asked about when the protest will end, Singh said it depends on when their suspension will be revoked. Rajya Sabha Chairman M. Venkaiah Naidu suspended the eight MPs on Monday, minutes after the House was reconvened. These lawmakers are from the Aam Aadmi Party (AAP), Trinamool Congress, the Congress and the CPI-M. They were accused of creating the ruckus in Parliament on Sunday.

All the eight members sat the whole night near the Gandhi statue, singing and sloganeering intermittently and refusing to leave. The eight MPs are — Derek O’Brien and Dola Sen of the Trinamool Congress, Rajeev Satav, Ripun Bora, and Syed Naseer Hussain of the Congress, Sanjay Singh of the AAP and K. K. Ragesh and E. Kareem of CPI-M.