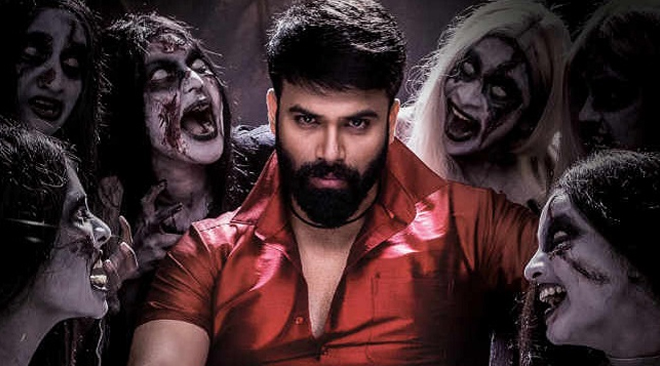 Cast: Ashwin Babu, Ali, Avika Gor, Urvashi, Ajay Ghosh
Crew:
Based on Dilluku Dhuddu 2 (Tamil) Movie
Editor: Gautham Raju
Writer: Sai Madhav Burra (Dialogues), Rambhala (original story)
Cinematographer: Chota K. Naidu
Music: Shabir
Screenplay-Direction: Ohmkar
Producer: Ohmkar
Tamil movies have an unique set of artists, on whom several types of films work and Shantanam is a comedian-turned-lead actor, who has a different comic timing from others and he is almost equal to star heroes in terms of popularity. He can pull off a simple comedy that just tries to spoof other films and make people laugh for few moments. Just to watch him and enjoy his style of satire, there is a crowd that go to theatres. Even for him, Dilluku Dhuddu 2 was a comedy that no one really expected from him. It tried to project him as a mass hero for one hour and then played on his strength as a comedian in the second hour.  This worked at the box office even though critics panned it. Now, imagine an upcoming actor with no market whatsoever, Ashwin Babu in such a role. Yes, it is destined to misfire.
Still, one can try to give points to Ohmkar for trying to use Raju Gari Gadhi franchise which he believes to be highly successful, with one blockbuster film and another average grosser as predecessors to this one. But the director in him, seems to just follow what the original films have done when remaking them. He tried hard to sell, Ashwini Babu as a mass hero and the actor just doesn’t have such charisma to pull off such roles.
Story follows a young woman, Maya (Avika Gor) who is saved by a ghost Yakshi all the time from those men, who say “I Love You” to her. The ghost only appears when she hears “I Love You” word said to Maya. Knowing about this ghost protection spell cast on the girl by her father, a black magician (Ajay Ghosh), Doctor (Brahmaji) who is frustrated by his neighbour, an auto driver Ashwin (Ashwin Babu), asks physiotherapist Maya to help him recover after a fight in which Ashwin rescues Maya, under influence of the ghost. How will Ashwin save himself from the ghost? Watch the film to know the details.
Coming to the performances, Ashwin can dance, he can fight and he can try to say a dialogue. But none of them are enough to see him as a lead actor and he can’t carry a film on his shoulders at this point. Avika Gor is completely wasted in the film. Urvashi, Ajay Ghosh and Ali partially succeed to evoke laughter. All others just irritate.
Technical crew like Cinematographer, Chota K. Naidu and Editor, Gautham Raju were given just one work, match each scene length, shot length, shot making with the original. Music by Shabir is highly forgettable and disposable. Ohmkar as a director did not bring any authenticity or nativity to the proceedings to make them feel as a Telugu film. Dialogues by Sai Madhav Burra are also completely unimpressive.
A poignant and shrewd filmmaker thinks about the casting in his/her film twice and try to understand why something worked in other language before giving it a go as a remake. Here, Ohmkar tried hard to sell his brother as a lead actor with an image but he forgot that Kanchana/Muni series works on Raghava Lawrence, because he has an image as a choreographer and entertainer.
Similarly, Dilluku Dhuddu kind of a weak script worked for Santhanam because people don’t expect strong story from him. Raju Gari Gadhi became a hit because it could land jokes and bring novelty to ghost comedies. But this kind of lazy remakes under the same name is highly damaging for his own brand. Skip this movie for your own good.
Rating: 1/5