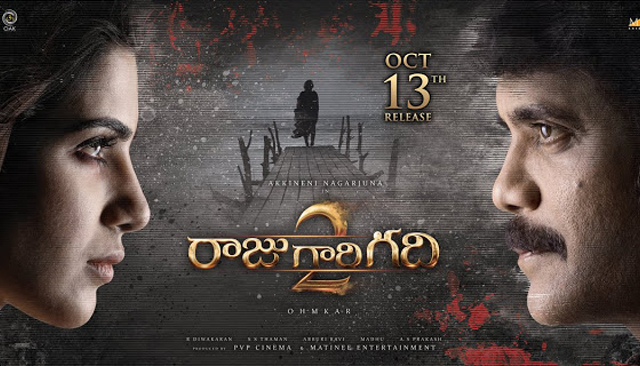 Akkineni Nagarjuna and Samantha Akkineni are coming together after Manam for Raju Gari Gadhi-2. Even though it is a second installment in the series, the movie doesn’t really have any connection with the first one. As horror comedies are becoming routine, can this one be any different to them or at least engaging? Let’s learn more …

Three friends, Kishore (Vennela Kishore), Praveen (Praveen) and Ashwin (Ashwin) decide to enjoy their vacation in Pondicherry in a secluded beach resort. But they start feeling a presence and decide to get some help. Bala Yesu (Shakalaka Shankar) gives further proof on supernatural activity and Church father (Naresh) decides to call in Mentalist, Rudra (Nagarjuna) to investigate. He solves the problem of Suhanisa (Seerat Kapoor) and confronts Amrutha (Samantha). So who is the ghost? What is her story? Why she is haunting the three? Watch the movie to know more..

Akkineni Nagarjuna did a tremendous job as the Mentalist. His screen presence coupled by SS Thaman’s back ground score, Rudra makes a great impact. Once he is on the screen, he owns the movie and carries it on his shoulders. The way his look varies with each revelation and his entire performance, makes the movie more engaging and fun.

Samantha Akkineni, delivers a power packed as a girl abused by cyber crime. She is the one who makes the climax engaging along with Nagarjuna. Watching them play in this horror drama the most important parts gives audience more rounded feeling.

Vennela Kishore scores in comedy while Shakalaka Shankar and Naresh help him in few sequences. Praveen and Ashwin did not have much and they did ok. Seerat Kapoor looked like a glam doll and Abhinaya too performed really well.

The major help for this movie is Diwakar’s Cinematography. He negates all the negative reflux and reflection  that could harm Visual effects with his lighting schemes. He understands the basics well and experiments it without holding back. His work in investigation scenes and scenes involving VFX is commendable.

Back ground score by Thaman is the best in the recent times. He celebrates Nagarjuna’s Rudra character with haunting BG score. He makes sure that there’s no deviation in attention and uses silences really well. A brilliant work on his part.

Abburi Ravi dialogues add much required social undertones to the proceedings along with comedy. Editing too is done very crisply.

Ohmkar decided to give his actors enough material but he doesn’t really feel inyo the story completely. He lags it here and there, with people wondering what the fuss is all about. He comes to his own when Nagarjuna is on screen and gets better with Samantha’s back story. As a writer he does a pretty average job in adapting Pretham but gives some solid climax to make the proceedings have a deep meaning. Had he been on his toes right from the beginning, the movie would have been ever better.

Samantha’s back story and performance

Lag with some comic bits.

A little heavy hand on sentiment

A bit too clichéd ending

The movie starts off on a regular note but built up on the thrill factor and delivers it right with Nagarjuna’s character. But the real fun in horror comedy genre is a bit lacking. The second half makes up for all the short comings and climax makes the movie more engaging. A weekend fun movie with a message you can dwell upon.