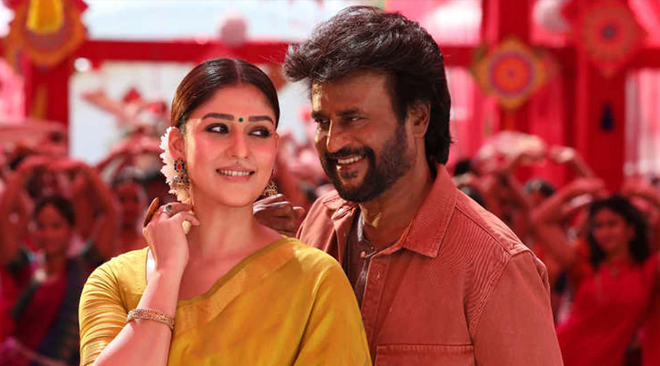 Star Cast: Rajinikanth, Suniel Shetty, Nivetha Thomas, Nayanthara,  Prateik Babbar, Jatin Shah, Dalip Tahil, and Sriman.
Music by Anirudh Ravichander
Cinematography by Santosh Sivan
Edited by A Sreekar Prasad
Directed by A R Murugadoss
Produced by Allirajah Subaskaran
CBFC – U/A
Runtime: 159:28 minutes
Superstar Rajnikanth is making everyone notice that he is still around and he cannot be taken lightly. His films are opening big as the fans want to see him on-screen no matter what but he became a house hold name because even common audiences enjoyed his film. Young directors seem to be forgetting that and are getting carried away by Rajni’s X-Factor. But Murugadoss is a director who handled big stars in his films and even delivered complicated messages in a simple way with all commercial ingredients. So, can he deliver a good film with Rajnikanth? Let’s find out if Darbar is a proof of his ability to handle Rajni …
Aaditya Arunachalam (Rajnikanth) is deputed specially as Commissioner of Police in Mumbai. He is asked to clean up the mess that drugs have created in the city. In the process of cleaning up, he nabs a young man, Ajay Malhotra (Prateik Babbar) and finds out that Ajay is the main dealer of drugs in the city. Entire judiciary and legislative systems try to save Ajay, still Arunachalam finds a way to assassinate him. Why did they all rallied behind this Ajay? What is his connection to Mafia Lord, Hari Chopra (Suniel Shetty)? What happened to Valli (Nivetha Thomas), daughter of Arunachalam? Watch the film to know more
Rajnikanth once again has put-in all the efforts he can to entertain audiences. He tried to look young, pulled off every tough sequences and even danced better than his other films. This looked like his strong statement to every other star that he is still around. But the story did not compliment his efforts. Either he is unable to pick the right script or directors are unable to convince him with a fresh one. Still, his efforts need to be saluted.
Nayantara, Nivetha Thomas, Prateik Babbar, Suniel Shetty and Yogi Babu are just there to fill the screen alongside Rajnikanth. At least Nivetha got one scene to show off her skills but every other person, is that a decorative piece. No one absolutely no one could leave an impact after the film.
Editing could have been better as some scenes look rushed and others too seem slightly jarry. As far as screenplay is concerned, an editor cannot do anything but the director needed to write better. Music by Anirudh Ravichander is not as good as his Petta album for Rajnikanth. Cinematography is good.
AR Murugadoss as a writer tried to do everything and threw everything on screen. He seems to have restricted himself to try and bring some vintage Rajni moments back. But all that needed to be arranged like a nice jewellery piece which makes us wonder how one could show such craftsmanship. Even though he is capable of such high crafty work, this black smith forgot to forge a decent looking crown for the King. Not a film that demands your attention with immediate effect, you can wait and look at all options, decide.
Rating: 2/5