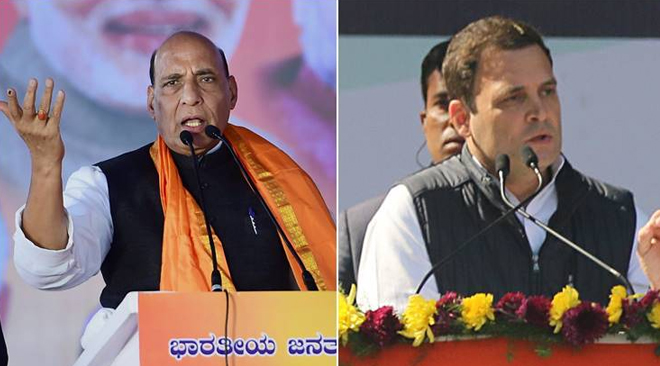 Union Defence Minister Rajnath Singh on Friday hit out at Congress leader Rahul Gandhi over his “Rape in India” remark, saying he does not have the “moral right” to be an MP and sought his apology in Parliament.

Singh expressed his point in the Lok Sabha after the House met for the second time after an adjournment following ruckus over the issue.

“Our country has been hurt. We had brought our colleagues here in this House to express regret over their statements made outside. He (Rahul Gandhi) should also come to this House and render his apology. He does not have a moral right to be an MP,” Singh said.

By this time Rahul reached the House.

Meanwhile, Congress leader of House Adhir Ranjan Chowdhury said the BJP was raising the wrong allegation against their leader.

Earlier, the issue was raised by the Minister of State for Parliamentary Affairs Arjun Ram Meghwal after the Lok Sabha Speaker paid tribute to the security personnel who sacrificed their lives in the December 13, 2001, Parliament attack, when the House assembled for the day.

Meghwal said Rahul Gandhi mocked Prime Minister Narendra Modi’s “Make in India” slogan calling it “Rape in India”. “Is he inviting people to rape in India? What does this mean? It is shameful. He should apologize to the people of the country.”

Later BJP”s member and an MP from West Bengal”s Hooghly Locket Chatterjee hit out at Gandhi condemning his statement. “Does Rahul Gandhi want people to rape women in India? Come rape us. Is this his thinking?”

Union Minister Smriti Irani said it has happened first time in the history of India that an MP has been inviting people to come and rape “Indian women”. “The son of Gandhi family is calling people to rape women.”

Gandhi made “Rape in India” statement during a public rally in Jharkhand”s Godda district on Thursday launching a scathing attack on Narendra Modi over crimes against women, saying: “the Prime Minister had launched ”Make in India” but, nowadays, it is ”Rape in India”.”

All the women BJP members gathered at one side in the House and started sloganeering “Rahul Gandhi Mafi Mango (Rahul Gandhi apologies), “We want justice”.

The opposition also stood on their seats rejecting the allegations against Gandhi sloganeering against the Centre.

Following the uproar, the Lok Sabha Speaker then tried to conduct the Question Hour, but adjourned the House till 12 noon.