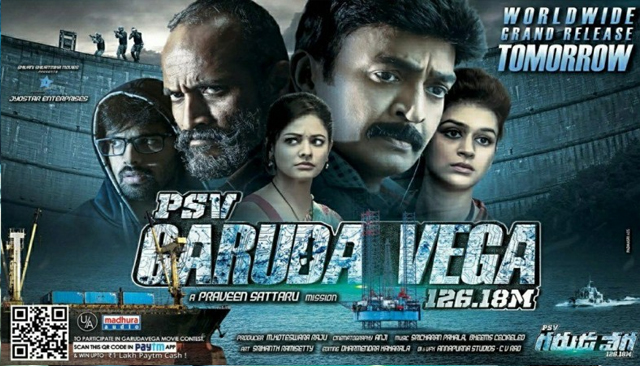 Hero Rajasekhar has planned to make a comeback with PSV Garuda Vega. The movie directed by Praveen Sattaru is said to be the costliest movie of the director and actor as well. The budget of the movie has become a huge discussion topic these days and let’s find out if the senior actor could make a good comeback with the film.

A hacker Niranjan Iyer (Adith Arun) is chased by few unnamed thugs in Darjeeling. He escapes from them and ends up in Hyderabad. There in a road accident he crashes on an NIA agent Shekar (Rajasekhar) car. He escapes from there but the people trying to kill him are caught by Shekar.

Shekar takes upon the case but his wife (Pooja Kumar) doesn’t like his job. They are on the verge of getting divorced. Shekar on one hand tries to solve the case of the hacker and also, save his marriage. Is he able to do so? How? Watch the movie to know more…

Rajasekhar, the angry young man is back as an angry yet sincere NIA agent with a tinge of mid-life crisis going on. He portrays the emotions pretty believably and makes sure that his performance doesn’t dilute the character and it’s motivation. He carries the movie well on his shoulders.

Pooja Kumar even though does good for what she is asked, she doesn’t really come up with a performance that stands out well. A better character and support from writing would have made it more fun.

Adith Arun just walks through his role as a hacker. He doesn’t dilute the scenes given to him but he needed the support of writers. Shraddha Das, Nasser, Ravi and Kishore did a good job in the roles they are given.

Anji, the main Cinematographer of the film scores high with the perfect tonal set to the film. He composed the shots really well and we can see the extreme effort from his side. Also, the other cinematographers, Suresh Ragutu, Shyam Prasad, Gika Chelidze, Bakur Chikobava worked as a team to provide us with the necessary quality that an investigative thriller needs.

Dharmendra Kakarala edited the movie well in the first half but his few choice of shots are poor to say the least. He does an uneven job mainly in the second half with few extended cuts that could have been avoided. He followed the script, true to the word but he needed to see that the intensity is not getting diluted too.

Sricharan Pakala, Bheems Cecireleo came up with good soundtracks and BGM score for the movie. They build on the intensity very well and used silences as per the necessity. Audiographer and Sound designers too did a commendable job.

Writers Praveen Sattaru and Niranjan Reddy, tried to build on a known premise with highly regular approach. The movie needed to be more intense and action friendly right from the word go but they use many scenes from English comedy action movies. The entire climax looks out of place as they look more inspired from a comic films and National Treasure films.

Director Praveen Sattaru doesn’t really care for the intense plot he has. He dilutes several sequences by trying too many things with his camera. He unnecessarily tries to many shaky shots that don’t really sync in with the approach his climax needed. He tries different elements but succeeds in only making an half intense and half unintentionally comedy film. He should tightened his script much more than he did.

Good first half that builds up the suspense.

Bad Narration in the final 30 minutes

Diluted approach for commerciality in the second half

Unnecessary comedy with Pooja Kumar in the climax

A major thriller needs a good settled yet intense approach. But writer-director Praveen Sattaru changes the tone all of a sudden to comedy and dilutes all the intensity he builds till the ending moments. The film has a 90’s thriller feel but the authenticity that the makers like RGV, Maniratnam and Govind Nihlani could bring is completely missing. On the whole the ride is bumpy but has it’s moments. A good attempt but could have been a better one with some concentration on the second half.