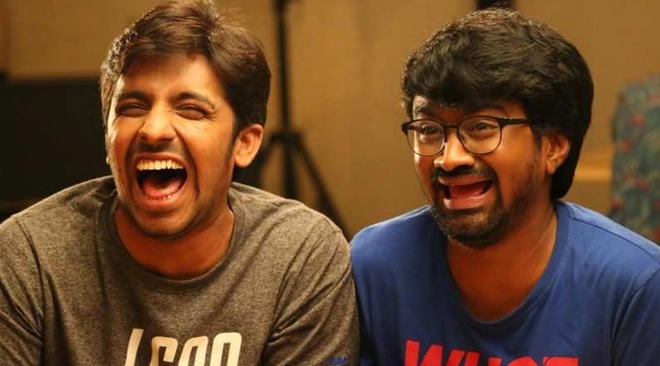 As comedians Priyadarshi and Rahul Ramakrishna in last three years earned lot of fame. Making them leads, a weird film with a swing at black comedy released in theatres, titled Mithai. Let’s see how it is …
Story::
A bonefide loser, Sai (Rahul Ramakrishna) has many aspirations and a love. His friend Johnny (Priyadarshi) becomes is the only support system in his life. Johnny doesn’t work and almost leeches on Sai.
Sai decides to get married but looses his job, the necklace he bought for his would-be in the matter of 24 hours. When police doesn’t help him find the robbers to get his necklace back, he attempts to chase it all by himself. He finds more important lessons in the journey.
Performances::
Rahul Ramakrishna is good as a loser and has some good comedy scenes to shine although scarce. He does come up with a decent performance but his loud tone just irritates.
Priyadarshi is good few scenes but his comedy doesn’t land at all. He is very loud and irritatingly unfunny throughout the film.
Kamal Kamaraju, Aditi Myakal, Swetha Varma, Arsha, Bhushan Kalyan didn’t fit into the characters one bit.
Technicalities::
Gary BH’s editing work can be called as one of the most weirdest possible jobs ever. He tried to give concepts of the director, visual representation but nothing worked.
Vivek Sagar gave the best possible loud score he can to the movie. The tone might be similar but his music isn’t fun enough.
Ravivarman Neelamegam’s visuals are as weird as the story and the presentation. But the world he created is like blind man’s gibberish even though there is a strong effort from Art Department.
Prashanth Kumar as a writer and director seemed to have taken inspiration from European weird indie comedy scene to create such weird drama. But his characters and situations, jokes don’t connect the audience and many come off as  amateurish attempts at fun.
Positives::
Couldn’t find one.
Negatives::
Actors overaction
Amateurish Script
Bad and Loud Humour
Non-sensical and Repetitive Screenplay
Weird scenes
Lack of sense in Direction
Analysis::
The lead actors to make fun of simple emotional fools, they start dancing for a very small thing as a distraction from scene. This is the level of stupidity that the director feels Indians present to others in the world. He tried to depict many as Bakaras (sheep, goat) who just believe in show than the content.
He touched upon Dudeism, Hippie Culture, Rich-Poor Difference, Difference between Dreams and actions that separate losers from winners, Use n’ throw nature, Selfishness, Selfless Friendship, Innocence, Fraud, Theft and Love, Commitment. With so much on his plate he delivered everything in the dumbest way possible and in the most amateurish way one can imagine. Waste of talent and effort!
Rating: 1.25/5