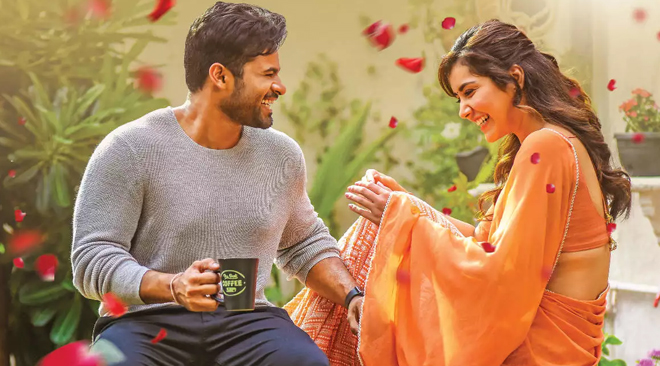 Star Cast: Sai Dharam, Raashi Khanna, Sathyaraj, Rao Ramesh, Vijayakumar, Naresh, Murali Sharma, Hari Teja, Satyam Rajesh and Bharath Reddy
Crew::
Music Composed by Thaman
Written by Deva Dutta
Cinematography Jayakumar
Edited by Kotagiri Venkateswara Rao
Directed by Maruthi Dasari
Produced by Bunny Vasu
CBFC: U
Runtime: 146 minutes
Maruthi Dasari became a hit machine with his formula entertainers which were revered for their comic value. He continued that formula so much that people started asking for more and he re-invented his formula with a film like Bhale Bhale Mogadivoy. But even that formula seems to be growing old with each new release of his. Can he entertain us with a routine and old story? Can he end the box office rut of Sai Tej? Let’s find out …
A old man, Raghuramayya (Satyaraj) loves his children so much that he prefers to let them all be happy in their own nuclear families, even when he is almost is on the death bed. Due to lung cancer, his health condition weakens so much that doctors, say that he will die in 5 weeks. He still doesn’t want to call his children to his home, even though he yearns to spend his last days, with him.
But the children doesn’t show much concern for him and think that they will lose their lives if they take so many leaves to spend with him, in his last stage. As they don’t understand their mistake in ignoring their father, eldest grandson Sai (Sai Tej), decides to change their over practical and selfish approach towards life. Was he able to succeed in his mission? Watch the movie to know more …
Music by SS Thaman is very loud and lacks any depth. He seems to have just played what came to his mind after listening to the script rather than trying to add soul to the story. Cinematography is good and editing is easy on eyes. Writing by Maruthi and Deva Dutta lacks any kind of depth, with over dependency on comedy. They go to any length to make the comedy work in a situation that doesn’t really warrants for a comic punchline and that makes them even sacrifice their characters.
This kind of silliness in writing doesn’t stop at making the characters look like caricatures, it also extends to such a harmful level that it dilutes any kind of emotional depth in the story and scene. Towards the climax, the writers try to salvage the situation with a concocted logic and that makes the movie, even more silly. Had they really digged deep into the emotional value of their story, even though it is all routine, the movie could have been salvaged from being a bore-fest with exaggerated comedy.
Performances of Sai Tej and Raashi Khanna are good but their characters lack any kind of depth. As the story restricts itself, their characters too doesn’t evolve from where they have started in the screenplay. Even the performances of actors like Satyaraj, Rao Ramesh feel completely inconsistent. Movie could have been a timepass flick but it dumbs itself down so much that we can’t take anything on screen seriously as it doesn’t engage us. Be sure to check availability of all other films before going for this one.
Rating: 2/5