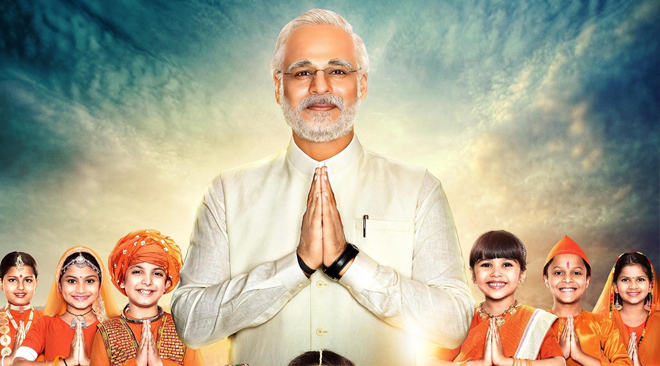 Cast: Vivek Oberoi, Zarina Wahab, Barkha Sengupta
Crew::
Dialogues: Haarsh Limbachiyaa, Anirudh Chawla, Vivek Oberoi
Screenplay: Anirudh Chawla, Vivek Oberoi
Story and Producer: Sandip Ssingh
Editor: Sanjay Sankla
Cinematography: Sunita Radia
Music: Hitesh Modak, AR Rahman, Shashi-Kushi
Director: Omung Kumar
Producers: Suresh Oberoi, Anand Pandit, Acharya Manish, Zafar Mehdi
First of all, Prime Minister of India, proved that he is the most charismatic leader of this generation and he is looking to make history as one of the most popular and loved as well. His election mandate indicates how big his name is but this biopic doesn’t serve that name and fame, one bit too. As a movie, this is a mess and it fails to really nail the point of showing the journey of a charismatic man who grew from being a Chaiwaala to Prime Minister of largest Democracy.
Movie starts with several insights into the journey of the man and picks up from his early age, when he had to start from a humble background. But it doesn’t try to show any kind of a character growth or the mistakes a person could have committed to become so strong and have spectacular iron-will to achieve things that otherwise are seen impossible.
Movie just strolls on and on, trying to say that Modi faced many problems and like that 5 year old who big-hearted only Cow passage, it keeps reiterating that Modi suffered a lot and Modi had to face many problems, financial and physical. It doesn’t move forward from stating the same even after he became a Chief Minister of a state like Gujarat. This kind of draggy narrative and love letter-ish narrative doesn’t appeal at all.
It seems to be an effort to please someone in the power explicitly than subtly saying the point that you can also dream about holding the highest office of the country if they really are prepared to work as well. Movie suffers from lack of innovative narration and content just makes no new points too. Narendra Modi himself makes all these points in his rallies and speeches. So, there is nothing groundbreaking or new in the film that lets us say that this movie should exist.
Vivek Oberoi doesn’t really give a believable performance as Modi but he is not too bad too. He did not mock him and let himself look like a sad imitation of a charismatic leader. He could have done much better with a potent team and director. Others too suffer from overacting syndrome like every actor in Omung Kumar’s films.
Director Omung Kumar proved beyond doubt that he doesn’t have sense of serious storytelling. He explicitly makes his actors shout as if they are on stage and he doesn’t have any idea on drama too. Either he melodramatise everything or just deliver things plain on face value. He couldn’t lead the team well to deliver a watchable film, at the least.
Rating: 1.5/5