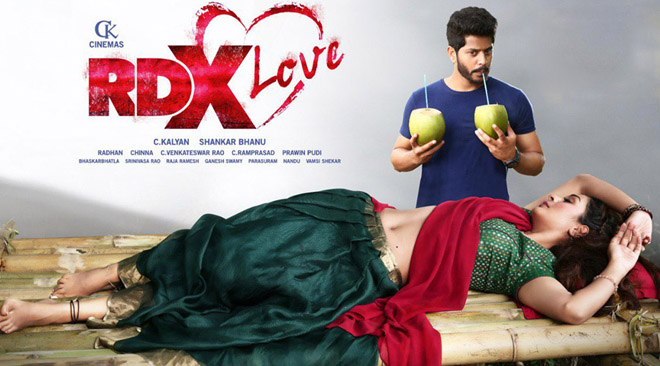 Cast: Paayal Rajput Tejus Kancherla, VK Naresh, Aditya Menon, Nagineedu, Tulasi, Aamani, Mumait Khan, Vidhyullekha Raman
Crew:
Music: Radhan
Cinematography: C Ram Prasad
Editor: Prawin Pudi
Dialogues: Parashuram
Story, Screenplay & Direction: Shankar Bhanu
Producer: C Kalyan
In a porn film, story is never an important aspect. It is just a tool to move from adult scene to another adult that keeps you engaged with and for the performances. You don’t need actors and you don’t people who add anything to the aesthetics of the film. All you need is a location, some mood lighting and performers who aren’t shy to give expressions as if they are seriously enjoying the act. RDX Love is just a glorified porn film that is made on B-Grade movie budget in Telugu Cinema.
The story doesn’t really have a purpose or meaning. For bringing a bridge, that too to make it a possibility with the sign of a corrupt politician who opposed it and killed women for going against him, we see heroine seducing the hero and then blackmailing his father. Through whom she puts pressure on the politician, who is now CM, to construct the bridge. Isn’t this story a porn film’s extension that Shakeela could have pulled off in late 90’s?
Payal Rajput advocates on safe sex and keeps telling to the villagers about the use of condoms for entire first hour. Later, she keeps telling them about abortions and opposes killing babies in wombs. You name it, the character played by her will try to pass off anything about sex as bold topic for discussion in a film that doesn’t really have 20 minutes of legitimate story or screenplay.
Director and Producer, planned to get the actress who is willing to go for the bold expressions in love scenes and who has such image. Payal did not act with ease at all in the film and her Indu, in RX100, seems like miles ahead to the performance she did in this one. Even scene construction is bizzare and highly forgettable.
We don’t just tend to feel uncomfortable watching everything unfold, we feel the purposelessness even more and more as the film keeps dragging on and on. No department in the film worked hard on giving any of their best except for Cinematographer trying to show Payal in different angles. The dialogues, screenplay and every element that is associated with creativity in this film go for B-Grade stuff without any fail. But they did not even properly deliver us a Shakeela film while their aim seems to be to make an easy penny at the box office. If you can avoid it, you will help yourself.
Rating: 1/5