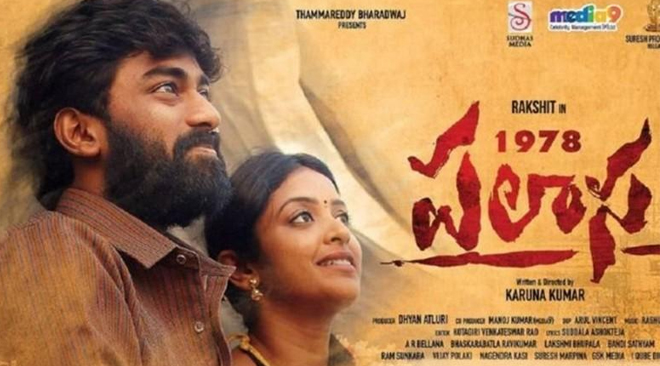 Cast: Rakshit, Nakshatra, Raghu Kunche, Vijay Ram, Thiruveer
Crew:
Written by Karuna Kumar
Cinematography by Arul Vincent
Music by Raghu Kunche
Edited by Kotagiri Venkateswara Rao
Directed by Karuna Kumar
Produced by Dhyan Atluri
Few films in Telugu Cinema try to come up with age old social problems and stories that showcase the caste divide in the society like a mirror. We all are silent witnesses of people getting oppressed regularly but we cannot help them at our level as we feel powerless. Through art such problems can be discussed openly and if they provide affective solutions, we can ask governments to try and implement as well. Palasa 1978 is said to be such a film by Film Pundits all over. Let’s see if it lives upto that buzz …
Story follows Mohan Rao (Rakshit) admiring a crooked person from their community, Bhairagi, who is the right hand man of Shavukaru. His brother Rangarao (Thiruveer), is a good drum player and with Mohan Rao as singer, they go around the nearby villages to perform, Srikakulam Folklore songs. But people from higher communities always treat them has third grade citizens and Mohan Rao, explodes on a higher caste person’s son, when the guy hits his father, Sunder Rao.
Rangarao tries to defend his love when Shavukaru’s son puts forth an indecent proposal. Shavukaru’s son hits him. Mohan Rao plans an attack against Shavukaru’s son and matter escalates. He finally becomes right hand man of Shavukar’s brother (Raghu Kunche) as he kills Bhairagi.  As Shavukaru & his brother’s fight intensifies, even Rangarao & Mohan Rao splits up. Shavukar asks Rangarao to kill his brother Mohan Rao. But they gang and kill Shavukaru. What happens next? Watch it on the silver screen.
Rakshit and Thiruveer try to emote as per their characters. They tried to make believe that they are the characters but we can easily make out that they are acting. In few scenes, they were good but they couldn’t deliver a standout performance that enables us to root for them. All other artists are taken for their fluency to speak in Srikakulam slang Telugu, one feels so. Movie aimed for freshness by doing so, but it doesn’t work like C/O Kancherapalem.
Cinematography by Arul Vincent is the highlight of this film. We can make out that the movie is made on a shoe-string budget but the visuals doesn’t feel tacky at all. In fact, Arul was able to give the movie a visual texture. Music by Raghu Kunche is not upto the level the film is expecting it to be. Editing by Kotagiri Venkateswara Rao could have been a little more tighter as the film feels jarred at places. Cut could have been slightly smoother than it ended up being.
Writing by Karuna Kumar follows a narrative structure that is common for these social message oriented films. For people who saw such films like Asuran, Pariyerum Perumal the screenplay or scenes doesn’t feel fresh. The conflict between the characters doesn’t really engage after a point as Mohan Rao feels like a person who idolised a goon than a person who was pushed to become a goon. Asuran depicts the conflict perfectly with filmy realism and here, director tried to be real while following filmsy structure.
This made the film look a bit jaded as the writing doesn’t seem to offer anything new after a point. The established conflicts don’t escalate progressively and it feels like the screenplay wanted to address a point at that time and it appeared there. Dialogues are good and director handled scenes competently enough. But his story and the performances of the actors don’t really take the film from being an okay-ish attempt to a must watch nuanced film for Telugu audiences. Our recommendation would be to watch it only if you enjoy slow moving films and some caste based discussions.
Rating: 2/5