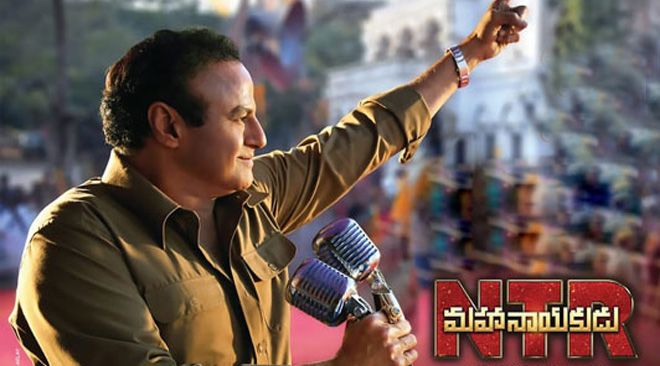 NTR is a legend as an actor and a big undeniable force in Telugu politics. His rise to the top as a star hero and as a politician is highly inspirational but the important aspect of his life has been skipped from NTR biopic by NBK. Still, what did the movie had to offer? Let’s discuss about it …

Story::
NTR (Nandamuri Balakrishna) decides to enter into politics and announces his party. He is able to get the mandate of voters with his glamour and grammar. Nadendla Bhaskar Rao (Sachin Khadekar) seems to support him but also discourage him to involve in party administration.
But NTR charisma wins over them all. Suddenly, NTR’s wife Basavatharakam (Vidya Balan) is diagnosed with cancer and NTR gets distracted with severe heart attack too. Nadendla takes this opportunity to steal the government but CBN (Rana) helps NTR to save the government and win over. Watch the movie, to know how?!
Performances::
Nandamuri Balakrishna as NTR is able to give his career best. As 60 year old NTR, he is more suitable than playing the younger part in the first part. He maintained good chemistry with all actors but his scenes with Vidya Balan stand out.
Vidya Balan is very good as Basavatarakam even though she doesn’t get a varied range. She did the best she can off the material. Rana is awkward as CBN. Bharat Reddy is good. Sachin Khadekar is terrific.
Kalyanram and others are adequate to the task given to them.
Technicalities::
Gnanasekhar VS did his best to bring the 1980’s to life and even tried his best to give some aesthetical depth to shots. But he again missed his mark in packaging large information in compact visuals.
Arram Rajasekhar seem to have been rushed to finish his edit as the editor did not land the emotional climax perfectly. He did give some portions correct pace while at many places he lacked in that very thing, pacing.
MM Keeravani produced better BGM OST than the songs for the film. In second part he got a chance to deliver better score and he did his best. Songs couldn’t give same high.
Krish and Sai Madhav Burra tried to fill up logical gaps with dialogues. They did not understand what is their true story and where they had to really focus. They gave CBN more material to shine than actual movie hero NTR and even sidetracked from the love story of NTR and Basavatarakam. They weren’t confident enough of the subject material, one gets such feel.
Krish as a director again lacks clarity to give his ideas the best possible visuals. As a writer, we can think off many ideas but visually they all should make better sense. Krish shows that he doesn’t really know about them as much as one wish he did. His ideas are brilliant on paper but on-screen they just end up as ideas and don’t translate as well as they should. Here, he sidetracks to involve politics more when his story has to be about NTR and his love for his wife and extended family.
Positives::
Vidya Balan and NBK Performances
Crisp Runtime
Few emotional scenes
Negatives::
Slow Narration
Pointless drag in screenplay
Main plot being sidetracked for other incidents
Unnecessary elevations
Taking completely one side in depicting known history
Lackluster and hurried end product
Analysis::
NTR Mahanayakudu doesn’t land the point of the biopic, that is to depict the love story of NTR and Basavatarakam while showing the various unknown aspects of NTR’s life as an actor and politician. Krish tried his best to keep the second one moving faster but the mistakes like bad lip sync and rushed editing does limit the punch.
While NBK and Vidya Balan are good, their story which was the main crux of the biopic got sidelined in the first one and even though they did some repair work in second part, it did not patch well. The political drama too did not have emotional involvement due to Krish’s treatment. Overall, Krish and Balakrishna couldn’t deliver a solid film yet again.
Rating: 2.25/5