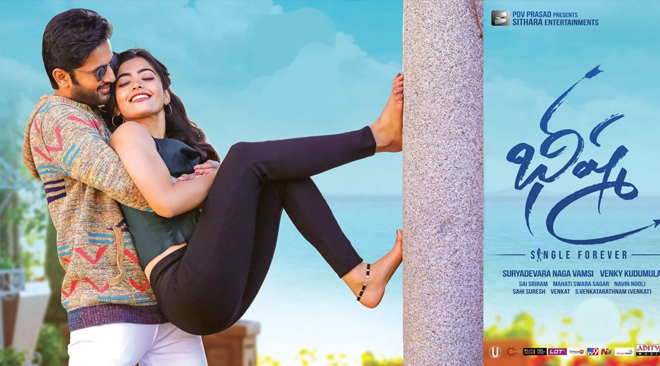 Star Cast: Nithiin, Rashmika Mandanna, Jisshu Sengupta, Anant Nag, Vennela Kishore, Sampath Raj, and Raghu Babu.
Music Composed by Mahati Swara Sagar
Cinematography by Sai Sriram
Edited by Navin Nooli
Directed by Venky Kudumula
Produced by Nagavamshi
CBFC – U
Runtime: 141:25 minutes
Nithiin to took 2 years to come up with his next film, Bheeshma after three disasters like Lie, Chal Mohan Ranga and Srinivasa Kalyanam. Venky Kudumula also took 2 years to come up with his next directorial, Bheeshma. So, could the director escape second film syndrome? Could Nithiin make a solid hit comeback? Let’s discuss …
The story follows a simple guy with no real ambition except for making some girl fall in love with him. He can go to any length but he thinks his name, Bheeshma (Nithiin) is the cause for him remaining single than himself. He gets to stay in a police station under ACP (Sampath) and unknowingly, falls for his daughter, Chaitra (Rashmika Mandanna). When ACP gets to know that Chaitra also loves Bheeshma, he lands at his house with an intention to threaten him but his father (Naresh) reveals that Bheeshma is the grandson of Bheeshma (Ananth Nag) who owns 8000 crores empire, Bheeshma Organics. Is it so? What is the real relation between the two Bheeshmas’? Watch the film to know …
Nithiin knows his limits very well and he tried to stay in his comfort zone for most part of the film. But he too turned completely blank in many scenes and that is due to writing than his lack of effort. Jisshu Sengupta got a chance to show off his comic timing and he did well. Sampath, Raghu Babu and Vennela Kishore just irritate. Rashmika Mandanna is trying hard to fit into regular heroine zone and that is not her strong forte!
Mahati Swara Sagar gave one hummable song like “Singles Anthem” and went on to get “inspired” from others work in BGM. Except for Singles Anthem nothing really lands. Rashmika worked hard to pull off some steps but they just look like a choreographer wanted to see how flexibly he can stretch the leads and got his answers than a proper dance step for music or lyrics. Navin Nooli’s editing and Sai Sriram camera work are not good and at the same time, not bad either.
Venky Kudumula tried to make a typical commercial film without understanding the basic premise of what he wanted to tell. He just went with the flow and we can see that in the script. The way he executed several scenes and tried to poke fun at unnecessary things, we can understand that he just trusted, one set of formula and executed it in his style. But that definitive style that he showed in Chalo is missing here. Movie falls flat with the most important twist and the justification in the climax, also follows the same suit.
One can understand the need for the makers to go comedy route for any and every story in recent times. But this film feels like the basic structure was trying to fit a comic narrative forcefully. The scenes doesn’t seem like they are flowing but it seems like they are following a structure that is set by filmmakers previously. Such approach derails the film without a any possibility of revival. We hope that the makers find a consistent tone rather than ticking the columns approach. Some films and makers can work with a formula in head but not all. This film is an example of how aping someone is not a good idea. This movie is more like “trying to be funny” comedy film that Hindi film industry cooks up but they too swing around with a solid base. If you want to this film, take care of your “base” need to keep yourself engaged in popcorn and beverages. It will be a looooongg ride!
Rating: 2.5/5