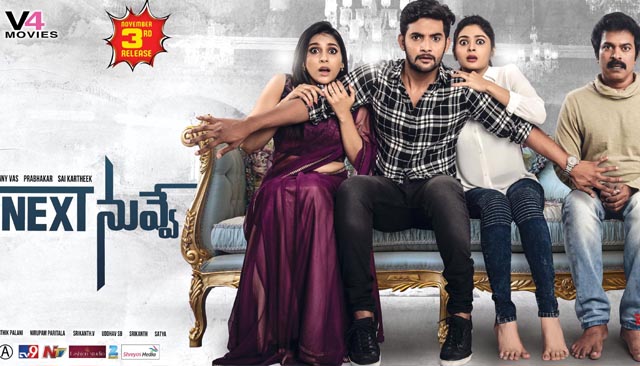 Horror Comedies have become the cream of the season these days. We see everyone attempting one as they cost less production wise and if they click they bring in good profits. Next Nuvve, directed by TV actor Prabhakar starring Adhi, Vaibhavi, Rashmi and Brahmaji in lead roles released today, promising a fun ghost comedy. Did the thrills frill or thrill us? Does the movie have enough legs to make you go and watch in the theatres? Let’s see..

A washed up serial director Kiran (Aadhi Saikumar) is in love with his heroine. A gangster JP loans him the money to make the serial. The serial gets cancelled and the director has to repay the amount to save his love from JP and his son. He manages to cheat JP’s son and opens a hill top resort with his father’s assistant, Sarath (Brahmaji). Sarath’s sister Rashmi (Rashmi) gets attracted to Kiran and all start the resort.

Few guests come to the resort and end up dead on each night. And an old man, every night comes to the palace and eats the food. Who’s this old man? Why the murders are happening? Are they suggesting some thing? Can Kiran crack the mystery and escape the threat? Watch the movie to know more …

Aadhi Saikumar who looked at ease in his first movies seems to have got used to doing the same and here to he does the same. Neither he looks like a washed out person nor he convinces you that he is one. He just does what is asked of him and there is nothing special or nothing too redundant in his performance. He is there because the story needs a lead.

Vaibhavi Shandilya is there to just fill up the screen and scare. Rashmi Gautam gets some scenes where she is trying to seduce Aadhi and some punches are too much. She pulls a convincing performance never the less. All others like Ram Jagan, Jaya Prakash Reddy, Raghu, Raghu Babu, Getup Sreenu and Avasarala Srinivas are used adequately enough.

Brahmaji shoulders the movie with his comic timing and the actor is a good form here. But in a very young role he seems a bit of misfit in few scenes as he keeps calling Aadhi boss but his performance covers it up well.

Karthik Palani, the cinematographer of the movie gives good quality visuals and tries to maintain different visual palette as per the director’s vision. Sometimes he clicks well and in some places, he fails.

Editor, Uddhav SB needed to come up even much better work in the first half mainly. He does come up with the goods in the comedy scenes but horror could have been edited better. Within the available footage he did what he could well enough.

Sai Kartheek comes up  with too loud Background score. He does well with one song, Meda Mida and others are forgettable. In the background score he seems to have followed the original to the tee.

Director Prabhakar, tries to be a very obedient remaker and he doesn’t deviate much from the original. The satires, the comedy and even the style of Brahmaji stance follow the original, Yaamirukka Bhayamey to the core. There is no originality in the jokes as they seem tobe old and lame. The double meaning innuendos and completely wasted thrills provide nothing new or highly funny to watch again. In the original, the director tried to make a spoof of horror comedies and that tone worked out but here Prabhakar even though followed the original could not bring in the same tonality to the proceedings.

Few jokes that work out fine.

Jumbled up jokes and old comedy

No real pep in the funny sequences

The movie ends up being a lame copy of the original. The original tried to make of clichés and tell a completely different tale to normal commercial horror comedies. The abstract structure made sense on a hero who could pull of the jokes convincingly but here that spirit literally vanishes.  The movie doesn’t have anything new to offer and you may try it out once if you like any of the actors.