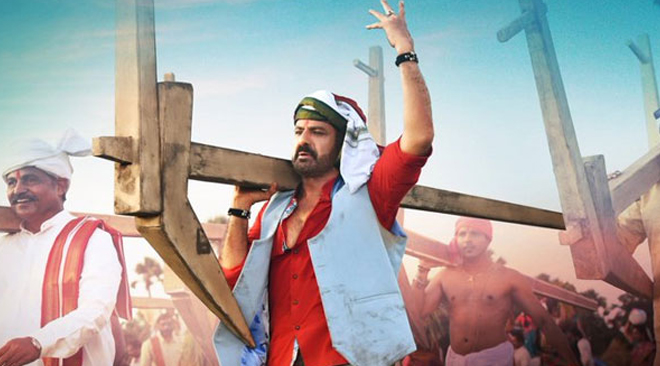 Star Cast: Nandamuri Balakrishna, Vedhika, Sonal Chauhan, Prakash Raj, Jayasudha, Bhumika Chawla, Shayaji Shinde, Naagineedu, and Saptagiri
Crew:
Written by Parachuri Murali
Music by Chirantan Bhatt
Cinematography by Ram Prasad
Edited by Kotagiri Venkateswara Rao
Directed by K S Ravikumar
Produced by Chillara Kalyan
CBFC: U/A
Runtime: 2hrs 50 minutes
Movies are meant to entertain everyone not just one sector of audiences. But stars tend to overlook all others and think about their fans all the time. They try to do movies that please them more at all times and that gradually, diminishes their box office pull with age unless they manage to re-invent formula with new talented directors like Rajnikanth. Somehow, Nandamuri Balakrishna doesn’t really think about such box office prospects and works in similar stories and with directors, who lost their touch in making a good commercial film, again and again. He came up with a Ruler, this time.
As a story, the movie starts off with NBK introduced as a person who is on the verge of losing his life. Sarojini Naidu (Jayasudha) saves him and decides to rename him as Arjun Prasad. She adopts him as her son and hands him over the big empire, she owns.  His brother-in-law (Shiyaji Shinde) doesn’t like this idea and tries to kill her. She is saved by Arjun Prasad and he grows so powerful that every other person within the company and business rivals fail to compete with him.
On the other hand, we see a village in UP that is tortured by local Thakur and they all are settlers from Andhra Pradesh. They want to own the land that they are cultivating which belongs to Thakur’s family. And Thakur, being a Minister wants to sell it off to a multinational company. They have a savior named Dharma (NBK), but he is believed to be dead and hence, they accept to the rules of Thakur. So, how are Dharma and Arjun Prasad related? You might have guessed it already.
Performances in this movie are completely forgettable and over-the-top to the core. You don’t understand why they are trying to be so hyperactive when in normal life people are more relaxed and not that eccentric. Everyone seems to be trying to deliver a punchline in every scene and that doesn’t allow the film to unfold at a pace. The movie just stretches on and on, until you lose your patience and shout at screen to stop the torture.
Balakrishna’s films rarely find a good writer and this time too, he found a bad writer to come up with scenes and screenplay. You feel jaded and dejected after watching the film, so much that you want the writer to sit beside you and explain, how he felt such scenes would work, in first place. On top of that the music is forgettable to the core.
Overall, the movie seems to be a film made out of all the disposable ideas that a writer can think of, after thinking about a story like this. Moviemakers need to update themselves with time but they seem to live and re-live in those “good old days” and make the same movies again and again. If you still want to see the film, think again and again, for your own safety.
Rating: 1/5