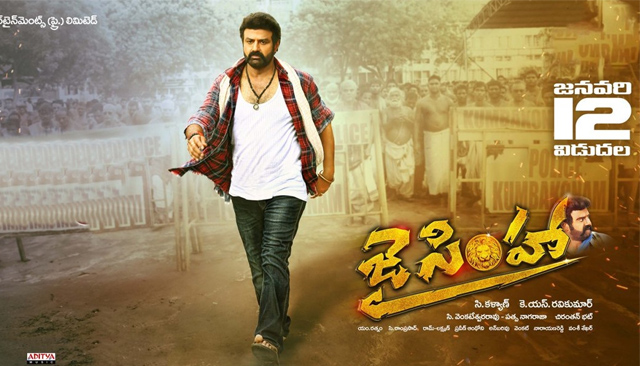 When we enter into a cinema hall, we normally leave behind all the mortal problems we have for some ‘reel’ escape. But after our Telugu Cinema Audience, films become the second conversation point after ‘real’ life issues and sometimes they end up being the biggest issues than the regular ones. We consider heroes as Demi Gods and expect them to live up to that image in their every film.

Nandamuri Balakrishna has acquired a mass hero image and with big hits, whenever he uses Narasimha name and Simha in title, he became synonymous for angry Lion. He is back with Jai Simha but the buzz for the film is not at that high range as expected as it looked a bit too old school. Still, it is a mass hero film for Sankranthi season and we can expect people wanting to know what it is all about and how did the actor fare. Let’s dwell into those details ..

Even though he can punch five members at a time, Narasimha (Balakrishna) chooses to be a peace-loving person all for his young kid, who is named as Balakrishna later. He shifts from city to city and enters Kumbhakonam finally, as it is a Temple city and he hopes it will help him lead a peaceful life. A Temple Trustee Murali (Murali Mohan) welcomes him to his house and gives him a job as driver too. He in return helps his young daughter, Tanya (Natasha Joshi) who is a complete drug addict to escape from an accident case. He takes the blame  and when the new ASP, tries to bully Temple Priests, he stands for the priests and becomes a local hero.

ASP in his anger, kills local goon Kunjippan’s (Prabhakar) brother, who is in ICU due to the accident caused by Tanya and tries to arrest Narasimha. But on his way to the station, Narasimha sees that his kid is kidnapped by Kunjippan goons and attacks them. There he meets Gowri (Nayantara) and knows that whom he thought his son is actually Gowri’s and ASP is her husband. Why Gowri and Narasimha’s kid look similar? Who is Gowri? What happened in Narasimha’s life that made him become a peace-lover? Watch the movie to know answers …

Nandamuri Balakrishna is his usual self and he has some rejuvenated energy as well. He seems to be in his elements but the make-up used for him looked borderline prosthetic and at times, that undermined his expressions through out the film. His danced with energy and fought with valor and in few episodes delivered the lengthy monologues and punch lines with intensity, like only he can. His performance cannot be undermined in this movie at any stage. But is that enough?

Nayantara got paid heft amount as remuneration but she managed to bring nothing to the film rather than her beauty and some grace. There is nothing new for her to shine and nothing much for us to even expect from her. Hari priya is used for an important character and she did give her best to the requirement of the story. Natasha Joshi except for her energy in Ammu Kutti song, didn’t really shine elsewhere as an actress.

Prakash Raj, Murali Mohan, Brahmanandam are just there to fill the runtime and their presence doesn’t add any purpose to the story or give us the required enjoyment. LB Sriram gets a routine character and many other actors like Sivajiraja, Ashutosh Rana, Prabhakar are their usual self on screen.

Cinematographer C Ram Prasad did a decent job in putting up the visuals expected from a big movie like this. But they look a bit old fashioned with not many concepts tried and sticking to keeping everything too simple, he doesn’t help the movie much too.

Editor Praveen Anthony did not cut the fights well enough. He did good job in the first half in keeping up the tempo of highly important scenes but failed in second half to maintain a rhythm and with highly predictable screenplay he doesn’t get a chance to even keep the scenes crisp.

Music by Chirantan Bhatt is highly mediocre and ok for the time we spend in the cinema hall. Nothing stays with us and back ground score is not as goosebumps inducing as it should have been for such high voltage mass entertainer.

Writer M.Ratnam did a great job in trying to mix the sentiment with action. But the problem is he wrote a story that could have worked in 80’s with 90’s Basha and Faction movie screenplay. We can predict each and every scene from a mile still the first half had some good moments and all that has been run down to tethers in the second half with week characters and regular flash back episodes.

K.S. Ravikumar is known for his no nonsense style commercial formula films and he is highly successful because of that unapologetic format films. But formulae have expiry date and he seems to have crossed that expiry date beyond any reasonable doubt. The way he handled emotions in the second half, people will have to wonder, if they travelled back in time to watch a movie with Balakrishna as the lead.

Two sequences in first half

Too much reliance on commercial formula

Characters that change abruptly for story to progress.

The escape from reality when you enter a cinema hall is not free. The entertainment has a value and be it Rs. 100 or Rs. 40, it needs to cater to them all. If you think this is enough for Rs. 40 and ignore Rs. 100 section or if you try to reach Rs. 100 section and fail to connect with Rs. 40, you’re in neck deep trouble.

Jai Simha appears to be the classic example of that. Telugu writers have given up on trying unique concepts but they are even unable to concentrate on writing the age-old formula with fresh enthusiasm too. For actors like Balakrishna who limit themselves as commercial heroes and try a different subject once in a while, writing a film gets tough. When you add a director like K.S. Ravi Kumar, who lost his touch with present box office audience, we end up watching mediocre film like Jai Simha. This film lacks in originality, lacks in consistent tone and even entertainment is highly scarce. Seems like not worth of your time.